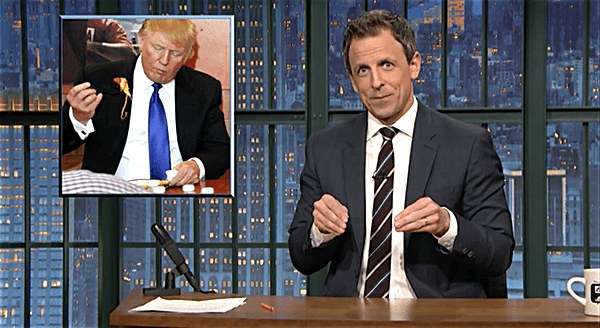 On Monday night Seth Meyers ripped Donald Trump for inciting violence at his campaign rallies and for his hypocritical comments about that violence.

As Meyers points out, Trump claims he has not condoned the violence that takes place at his events. “Which is true, if you exclude all the times he explicitly condoned violence,” Meyers says.

And despite all the serious analysis of why Trump is dangerous to America–how he is propelling a racist and fascist agenda–doing so doesn’t seem to hurt him. What really seems to hurt him, however, is mockery and laughter. To make that point, Meyers quotes an interview Trump did recently in which he states, “a lot of people have laughed at me over the years… now, they’re not laughing so much.”

Cue, Meyers: “That’s his goal: to not be laughed at. Which is why we can’t stop. It is possible to take him seriously and also remember he’s a clown. Yes, he’s a dangerous clown. He’s a clown with a knife. But at the end of the day, he’s still a f**ing clown.”

Watch Meyers make a mockery of Trump, below.