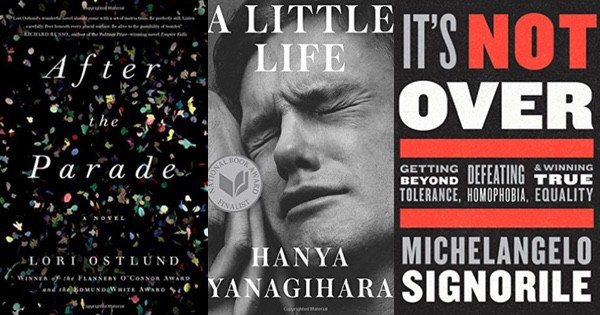 The Publishing Triangle, the association of lesbians and gay men in publishing, has announced the nominees for its 28th Annual Triangle Awards to be awarded on April 21 in LGBT Fiction, Nonfiction, Poetry, and Debut Fiction as well as (for the first time) Trans and Gender-Variant Literature.

The Publishing Triangle Awards will take place at the Tishman Auditorium of the New School’s University Center building and the ceremony is free and open to the public, with a reception to follow.

Finalists for the Judy Grahn Award for Lesbian Nonfiction

Finalists for the Randy Shilts Award for Gay Nonfiction

Frank: A Life in Politics from the Great Society to Same-Sex Marriage, by Barney Frank (Farrar, Straus and Giroux)
A House in St. John’s Wood: In Search of My Parents, by Matthew Spender (Farrar, Straus and Giroux)
It’s Not Over: Getting Beyond Tolerance, Defeating Homophobia, and Winning True Equality, by Michelangelo Signorile (Houghton Mifflin Harcourt)
Visions and Revisions: Coming of Age in the Age of AIDS by Dale Peck (Soho Press)

Finalists for the Audre Lorde Award for Lesbian Poetry

Finalists for the Thom Gunn Award for Gay Poetry

Finalists for the Edmund White Award for Debut Fiction

Finalists for The Ferro-Grumley Award for LGBT Fiction

After the Parade, by Lori Ostlund (Scribner)
JD, by Mark Merlis (Terrace Books/University of Wisconsin Press)
A Little Life, by Hanya Yanagihara (Doubleday)
A Poet of the Invisible World, by Michael Golding (Picador)
Under the Udala Trees, by Chinelo Okparanta (Houghton Mifflin Harcourt)

Other awards that were announced:

Christopher Street magazine is the winner of the Publishing Triangle’s Leadership Award. Created in 2002, this award recognizes contributions to lesbian and gay literature by those who are not primarily writers, such as editors, agents, librarians, and institutions. The winner receives $500.

For its valuable work in creating and encouraging LGBT literature, The Publishing Triangle is presenting the Leadership Award to Christopher Street. Since the magazine is defunct, the award will go to its founders and editors: Charles Ortleb was the publisher and first editor; Patrick Merla followed as editor; he in turn was succeeded by Tom Steele; Michael Denneny was top advisor. Together these four men, with the help of others—including Paul Baron, Dorianne Beyer, and Rick Fiala—made an invaluable contribution to our community and culture.

Eloise Klein Healy is the 2016 recipient of the Publishing Triangle’s Bill Whitehead Award for Lifetime Achievement, named in honor of the legendary editor of the 1970s and 1980s. She is the author of eight books of poetry—including Passing, a finalist in 2003 for the Publishing Triangle’s Audre Lorde Award—and three spoken word recordings, and she was named the first Poet Laureate of Los Angeles in 2012. The founding chair of the MFA in Creative Writing Program at Antioch University Los Angeles, Healy is now Distinguished Professor of Creative Writing Emerita there. She also directed the Women’s Studies Program at California State University Northridge and taught in the Feminist Studio Workshop at The Woman’s Building in Los Angeles. She is the founding editor of Arktoi Books, an imprint of Red Hen Press specializing in the work of lesbian authors. A Wild Surmise: New & Selected Poems & Recordings is her latest book. The Bill Whitehead Award is given to a woman in even-numbered years and to a man in odd years, and the winner receives $3000.

On the evening before the awards ceremony, The Publishing Triangle will sponsor a reading by a select group of finalists; this event will be held at Bureau of General Services—Queer Division, the bookstore inside the LGBT Community Services Center at 208 West 13th Street, Manhattan. The lineup of participating finalists who will be reading here on April 20 will be announced later. This reading, which will begin at 7 p.m., is free, and books by the readers will be sold.