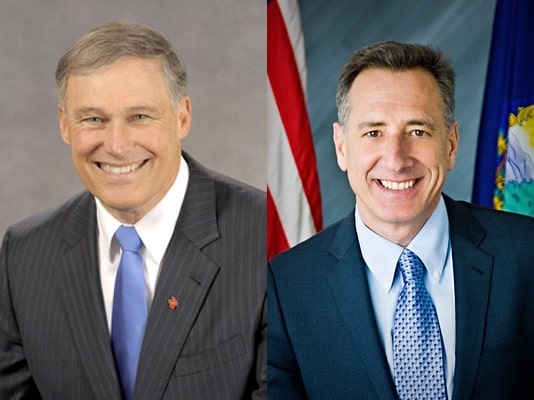 Inslee’s memo to cabinet and agency heads today bans “publicly funded non-essential travel” to North Carolina as long as the bill “exists in its current form.” Inslee spokesperson Tara Lee says “non-essential travel” covers most state-funded trips. “Essential travel would only be to absolutely fulfill the duties of the work of the state,” she says in an email. “It would be a very rare case for that to happen.”

“It is the law of Washington State and the policy of my administration to demand equality for all persons,” Inslee’s memo reads.

“The law passed in North Carolina is an absolute disgrace,” Gov. Shumlin said. “Vermont has a proud tradition of protecting the rights of LGBT individuals. I’m making this decision in that tradition. I’m proud to join with New York in taking this action. I hope other states will join us in applying pressure on North Carolina to recognize common sense, common decency, and common humanity and repeal this law.”

Murray issued an executive order on Monday prohibiting the use of city funds for travel to and from the Tarheel State.

De Blasio, during a Monday news conference with reporters, said he would be doing the same:

“Yes, we’ve initiated a non-essential travel ban for North Carolina as of today, and in the event that the governor’s veto in Georgia is overridden, we will do so for Georgia as well,” de Blasio said Monday afternoon at an unrelated press conference.

“I think it’s quite clear that voices of conscience all over the country are expressing outrage at these decisions which are reinstituting discrimination against the LGBT community,” he said, adding, “My hope is that both these states will relent, but we certainly are not going to have any non-essential travel to those states if these laws do continue in effect.”

“We are standing united as San Franciscans to condemn North Carolina’s new discriminatory law that turns back the clock on protecting the rights of all Americans including lesbian, gay, bisexual and transgender individuals. Effective immediately, I am directing City Departments under my authority to bar any publicly-funded City employee travel to the State of North Carolina that is not absolutely essential to public health and safety.

“I believe strongly that we should be adding more protections to prevent discrimination against lesbian, gay, bisexual and transgender communities in the United States, not taking them away.

“I would like to applaud cities like Charlotte and its Mayor, Mayor Jennifer Roberts, who have taken steps at the local level to protect gay, lesbian, bisexual and transgender people from discrimination. I also applaud Atlanta Mayor Kasim Reed who is a champion for equality for all.

“With other states like Georgia on the verge of passing more discriminatory laws, let me be clear that San Francisco taxpayers will not subsidize legally-sanctioned discrimination against lesbian, gay, bisexual and transgender people in any City or State.”

Cuomo followed shortly after the mayors, banning all non-essential state travel to the Tarheel State:

“In New York, we believe that all people – regardless of their gender identity or sexual orientation – deserve the same rights and protections under the eyes of the law,” Cuomo said in a statement. “From Stonewall to marriage equality, our state has been a beacon of hope and equality for the LGBT community, and we will not stand idly by as misguided legislation replicates the discrimination of the past. As long as there is a law in North Carolina that creates the grounds for discrimination against LGBT people, I am barring non-essential state travel to that state.”