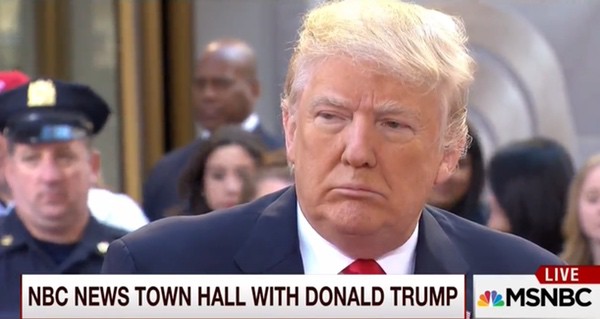 This morning during an NBC News Town Hall, Donald Trump responded to questions submitted by people in the crowd and through social media, one of which had to do with transgender rights and North Carolina’s anti-LGBT “bathroom bill” HB2.

Trump said the bill should not have been passed and neither should similar bills:

Trump said he does not know if there are transgender people working in his organization.

Asked Matt Lauer: “So if Caitlyn Jenner were to walk into Trump Tower and want to use the bathroom, you’d be fine with her using any bathroom she chooses?”

“That is correct,” replied Trump.

Trump also said he disagrees with the creation of new, gender neutral bathrooms, saying it would be too expensive.

“I think that would be discriminatory in a certain way…Leave it the way it is.”

Previous Post: « Republicans Politicians Should Use a Separate Bathroom to Keep the Public Safe From Their Sex Crimes: WATCH
Next Post: Bernie Sanders and Hillary Clinton Get the Bad Lip Reading Treatment: WATCH »