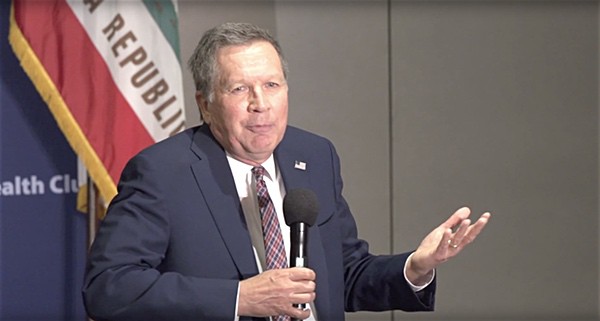 At a Commonwealth Club of California town hall on Friday, John Kasich was confronted by 62-year-old Kelly Bryan, who asked the Ohio governor and presidential candidate whether he believes that people are born gay.

“Do you believe that some people are born gay?” asked Bryan. “Gay people are human beings and not a lifestyle choice. Please respond without prayer being an answer.”

Kasich responded with his thoughts about religion, and then offered a suggestion about “religious freedom” bills that he’s been using for weeks on the campaign trail:

“In terms of me, I don’t believe in discrimination. I think there is a balance, however, between discrimination and people’s religious liberties. But I think we should just try to, like, take a chill pill, relax, and try to get along with one another a little bit better instead of trying to write some law to solve a problem that doesn’t frankly exist in big enough numbers to justify more lawmaking.”

“Is it?” Kasich asked. “I haven’t read that thing lately.”

“Well you should know what you’re doing,” demanded Kelly.

“They don’t tell me what to do by the platform. Republican Party is my vehicle not my master,” Kasich shot back, getting applause from the audience.

Interjected Bryan: “But do you know that people are born gay?”

“I’m not going to get into the analysis of this or that,” Kasich replied.

“Probably? I don’t know how it all works. Are they? In all probability, they are. You have free regular rights. We’re not denying you any rights. I’m not in Ohio. I’m not out to discriminate against you.. I think you should have as good a life as anybody else.”

“If I saw this was becoming a huge problem, then we might have to write a law. But every time someone writes a law around this subject, guess what happens? You have to rewrite the law cause they never get it write. So let’s just respect one another a little more.

“Do I think people are born gay? Probably. I’ve never studied the issue. But I don’t see any reason to hurt you, or discriminate you, or make you feel bad, or make you feel like a second class citizen. I don’t think that’s right. Cause you know what? Everybody’s created in the image of the Lord.”

Kelly, a Democrat who said he will vote for former Secretary of State Hillary Clinton, told CNN Kasich’s answer “was not really an answer” and that he had asked the question because he was concerned with recent state laws written to protect religious freedom that some view as discriminatory against the LGBT community.