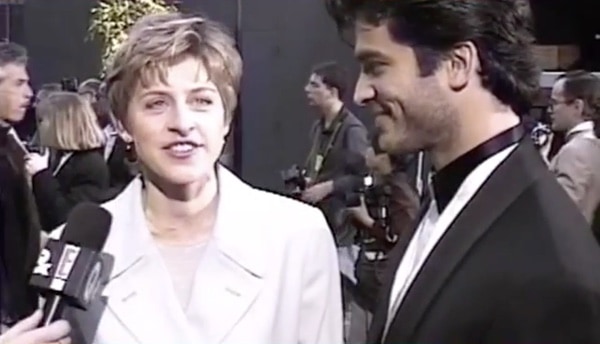 Actor Johnathon Schaech held a Reddit AMA yesterday and one of the questions that came up was whether he had ever dated Ellen DeGeneres.

Is it true that you dated Ellen DeGeneres? I saw that online one time that someone said you had dated and didn’t believe it, but when I googled you and Ellen, pictures came up! Were you just friends? I love Ellen! Her show is the best!

“My manager asked me to accompany her to events. She was scared people would not watch the show, her sitcom Ellen, because she was gay.  It was an honor. I grew up with two gay aunts and a gay uncle. My aunt died of cancer. She was a proud woman and she didn’t get proper care because she didn’t want to be away from her partner. Hospitals didn’t allow partners the same rights as a spouse. When you have someone you love in your life that is gay or a lesbian it’s very clear that they deserve the same rights as anyone else. It’s not about religion.  If you don’t love ELLEN now — you don’t watch her show. She’s a great example for the human race.”

The Reddit user pressed on: “So, you were Ellen’s beard?? or was she already out? That is so cool. So kind of you to do that!”

“She wasnt out…I was suppose to perform in her coming out episode but I ran the marathon and couldnt walk the next day, the netowrk fired me cause they thought I was lame. I was lame, DONT RUN A MARATHON when your given a great gift.”

Here’s some footage online of Ellen and Schaech holding hands at the Screen Actors Guild Awards in 1995.