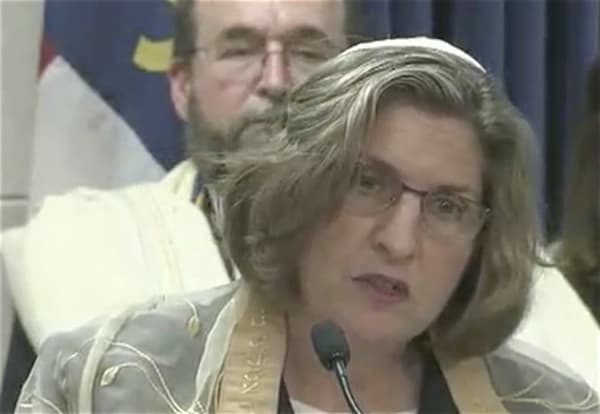 Religious groups are starting to make their voices heard on North Carolina’s discriminatory anti-LGBT law with 45 rabbis and all eight bishops of the Methodist Church calling for repeal, WRAL reports:

Forty-five rabbis signed a letter expressing “deep dismay” with House Bill 2, and all eight bishops of the United Methodist Church in North Carolina issued a similar letter in recent days.

“HB2 targets one of the most vulnerable groups in our society and eviscerates their ability to participate actively in community,” Rabbi Lucy Dinner of Temple Beth Or in Raleigh said at a Tuesday afternoon news conference, shortly before rabbis held a Passover prayer service with lawmakers at the Legislative Building.

Said Dinner: “We are here to implore the North Carolina legislature and governor, let all people go – and not just to the bathroom. If only it was just about bathrooms, that would be bad enough. HB2 discriminates in so many more ways.”

The call from the rabbis followed a letter from the Methodist bishops on Monday:

The Methodist bishops’ letter, entitled “A More Excellent Way,” came out Monday – the first day of the 2016 legislative session – saying Methodists “are called to live the hospitable welcome of God in a world with increasing boundaries, borders, fences and walls.” The letter noted the “hurried passage of House Bill 2 and its resultant harm to North Carolina” in urging lawmakers to rescind the measure.

“We dare not add to the increasing levels of fear, suspicion and divisiveness in our state and in our nation. Our calling to welcome, to forgive and to love both God and neighbor is our powerful gift to the world,” Bishop Larry Goodpaster, Bishop Hope Morgan Ward and retired bishops Ray Chamberlain, Charlene Kammerer, Lawrence McCleskey, C.P. Minnick Jr., Thomas Stockton and William Willimon wrote in the letter.

Presbyterian leaders came out against the legislation shortly after it passed.

Catholic leaders have either criticized Charlotte’s LGBT ordinance (which prompted the anti-LGBT legislation) or refused to take a position on the law.

Previous Post: « Pats and Eddie are Infamous and on the Lam in the Full ‘Absolutely Fabulous: The Movie’ Trailer: WATCH
Next Post: Stephen Colbert Has a Message for Lawmakers Pushing ‘Bathroom’ Bills: ‘You’re the Weirdos’ »