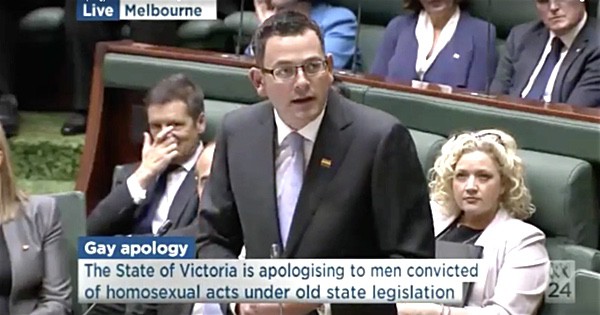 Daniel Andrews, the Premier of Australia’s state of Victoria (the most densely populated state, which includes Melbourne), today apologized for laws which convicted thousands of gay men of buggery, gross indecency and loitering for homosexual purposes before homosexuality was decriminalized in 1980.

Said Andrews: “There was a time in our history when we turned thousands of ordinary young men into criminals. And it was profoundly and unimaginably wrong.”

“Young people. Old people. Thousands and thousands of people. I suppose it’s rare when you can’t even begin to conceive what was on the minds of our forebears in this Place. But I look back at those statutes and I am dumbfounded. I can’t possibly explain why we made these laws, and clung to them, and fought for them. For decades, we were obsessed with the private mysteries of men. And so we jailed them. We harmed them. And, in turn, they harmed themselves. Speaker, it is the first responsibility of a government to keep people safe. But the government didn’t keep LGBTI people safe. The government invalidated their humanity and cast them into a nightmare. And those who live today are the survivors of nothing less than a campaign of destruction, led by the might of the state.”

Tomorrow, a young bloke will get hurt. Tomorrow, a parent will turn their back on their child. Tomorrow, a loving couple and their beautiful baby will be met with a stare of contempt. Tomorrow, a trans woman will be turned away from a job interview. And tomorrow, a gay teenager will think about ending his own life. That’s the truth.

There is so much more we need to do to make things right. Until then, we can’t promise things will be easy. We can’t guarantee that everyone in your life will respect the way you want to live it. And we can’t expect you to make what must be a terrifying plunge until you know the time is right. But just know that whenever that time comes, you have a government that’s on your side.

So let me finish by saying this: If you are a member of the LGBTI community, and there’s someone in your life that you love – a partner or a friend – then do me a favor: Next time you’re on a tram in Melbourne, hold their hand. Do it with pride and defiance. Because you have that freedom. And here in the progressive capital, I can think of nothing more Victorian than that. Speaker, it’s been a life of struggle for generations of Victorians. As representatives, we take full responsibility.

We criminalized homosexual thoughts and deeds. We validated homophobic words and acts. And we set the tone for a society that ruthlessly punished the different – with a short sentence in prison, and a life sentence of shame. From now on, that shame is ours. This parliament and this government are to be formally held to account for designing a culture of darkness and shame. And those who faced its sanction, and lived in fear, are to be formally recognized for their relentless pursuit of freedom and love. It all started here. It will end here, too.

To our knowledge, no jurisdiction in the world has ever offered a full and formal apology for laws like these. So please, let these words rest forever in our records: On behalf of the parliament, the government and the people of Victoria … For the laws we passed. And the lives we ruined. And the standards we set. … we are so sorry … humbly, deeply, sorry.”