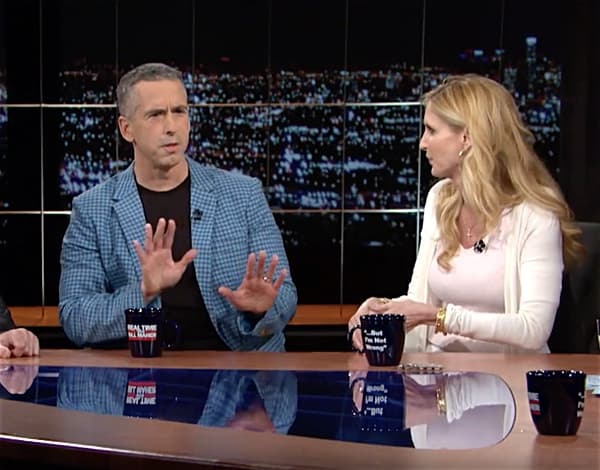 Bryan Cranston, Ann Coulter, Dan Savage and Nick Gillespie were on Bill Maher’s Real Time panel last night and talked about how transgender people, Maher notes, “somehow have risen to the top of the political charts about where they can go to the bathroom.”

“They couldn’t demagogue anymore about gays and lesbians because too many of us are out and too many people know us so they took the same old script – oh they’re recruiting children, preying on children, threatening children, creeping in bathrooms. That was what they said about gay men 40 years ago. And they’re just taking that now and applying that to trans women and it’s bullsh*t and trans women and men use bathrooms all over the country and have for-ever. And they have no cases to point to where a trans person has exploited a civil rights protection to prey on a child.”

Interjected Coulter: “Can I give the alternative argument?”

Gillespie: “Wait is it about Mexicans?”

Coulter: “I can make it about Mexicans.”

Savage: “Instead of building a wall we need to build a stall, (imitating Trump) that’s beautiful and it’s huge.”

Cranston: I think that’s what Trump meant – build stalls all along the border.”

Maher: “And I’ll make Caitlyn Jenner pay for it!”

Coulter went on to present her argument:

“The argument on the bathrooms – it’s not that transgender people are going to go and molest children – it’s that once you say that men can go into women’s bathrooms – men who are out shopping with their little daughters and don’t have mommy to bring her in there. It’s not that the trans are going to molest them. It’s that a child molester now has the right to go into that bathroom.”

Responded Savage: “That’s bullshit. A child molester doesn’t need to put on a dress to go into a bathroom. You can Google ‘sexually assaulted in a restroom’ and you get thousands of examples of cisgendered straight men.”

Added Maher: “You know who the child molester is? It’s Dennis Hastert. Who was sitting watching boys shower year after year in a La-Z-boy chair – because he wanted to make sure nothing weird was going on in there – so he watched the boys shower…this is the child molesting we have.”