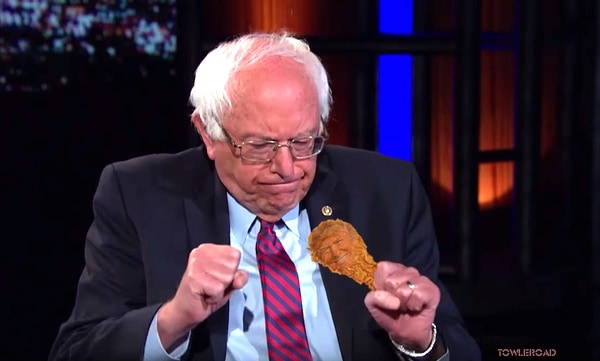 Last night, Bernie Sanders sat down with Bill Maher to express his disappointment that Donald Trump backed out of debating him and talk about the upcoming California primary.

Trump, as you may know (and especially if you’ve been following the #chickentrump hashtag on social media, released this statement yesterday.

Based on the fact that the Democratic nominating process is totally rigged and Crooked Hillary Clinton and Deborah Wasserman Schultz will not allow Bernie Sanders to win, and now that I am the presumptive Republican nominee, it seems inappropriate that I would debate the second place finisher. Likewise, the networks want to make a killing on these events and are not proving to be too generous to charitable causes, in this case, women’s health issues. Therefore, as much as I want to debate Bernie Sanders –  and it would be an easy payday – I will wait to debate the first place finisher in the Democratic Party, probably Crooked Hillary Clinton, or whoever it may be.

G'night Twitter. Thanks for the laughs! It's up to you to keep #ChickenTrump trending! Best one of the night: pic.twitter.com/Hi9Djlw3JY