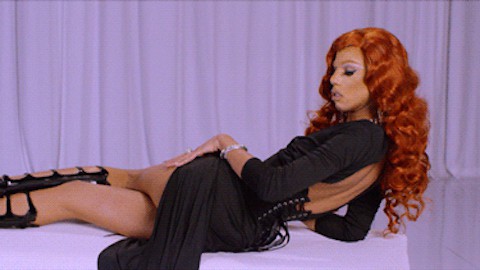 Has there been such a quality top 4 in RuPaul’s Drag Race herstory? After weeks of competition (and some shocking eliminations along the way), we’ve whittled down the competing queens to a solid final four competitors that each represent a unique take on the art of drag.

And yet, despite my enthusiasm for the remaining gals, I felt this episode was a bit of a bore. The challenge and runway didn’t feel like they were putting them through one final intense gauntlet before the finale. Naomi was right; this did feel like the last day of school. It was all yearbook signings and hugs and keep in touch, but I wish it felt more like the high-pressure SATs.

Let’s review what went down in our SPOILER-filled recap below.

There was no mini-challenge this week. Instead, the ladies were instructed to show up in full face to shoot Ru’s latest music video for “The Realness.” Unlike previous videos, the task at hand isn’t all that demanding. There’s no complicated chiffonography or hairography, just floatography, which basically means lying on your back and mugging. Somehow, Kim Chi still manages to fall while lying down. It’s actually just sort of pathetic. As for the rest of the video, there really wasn’t the kind of acting-heavy component that, say, Jinkx, Alaska and Roxxxy had to deal with. Instead, the ladies are basically just told to do their thing, pose, dance, whatever. (Kim Chi must be thanking her lucky stars.) For whatever the video lacked in complex choreo and concepts, it allowed for the queens to really show what each of these gals does best.

On the runway, the final four brought their best drag, and RuPaul brought her best attempts at getting the ladies to cry. First, she whips out photos of each queen as a child and asks the queens to give their younger self a message. Each queen imparts some wisdom about being true to yourself and some permutation of the “It Gets Better” mantra, but Kim Chi is particularly touching. She breaks down completely in tears, but bounces back for one final quip about imploring her younger self to take some dance lessons. Well played. It was a powerful moment, but whatever happened to the Tic Tac lunch with Mama Ru?

The queens were also asked to make their case for why they deserve the crown. The downside of having such a strong final four who actually seem to like and respect one another is that they all sort of held back when really asked why they deserve to win over the others.

Finally, all four queens did a tepid lip sync that failed to really allow any one of them to connect with the audience. Personally, I would have preferred a standard one-on-one lip sync with two queens really vying for a spot in the top 3. But maybe that’s just my personal drag queen bloodlust.

On to the rankings!

1. Since day one, this has been Bob’s crown to lose. Aesthetically, she’s a competent queen, but she’s clever and cunning in a way that elevates everything she does. Her humor is sharper than it needs to be (check out this beyond brilliant performance that masterfully blends slapstick, pop culture and racial commentary with hilarious results), and she’s got that something special that makes her compulsively watchable. I would watch a Bob Netflix special. I would watch Bob lip sync a bar down. And I will cheer when Bob is awarded the season eight crown.

2. You know, it’s been hard to overlook Kim Chi’s deficits in dancing, but let’s take a minute and give it up for the gurl. Most queens would be lucky to have one or two runway looks as exciting and inventive as Kim brought every single week. Seriously. Every single one of her runway looks has been downright killer. On artistry alone, Kim Chi can’t be beat. Then, she’s got that sweet spirit and heartwarming journey on her road to self-acceptance. You can’t help but root for her. As we’ve learned, however, America’s Next Drag superstar needs to do more than just look the part. She needs to run for office, sell workout videos, star in children’s shows, do celebrity impersonations, and dance dance dance to Lucian Piane songs. I love Kim, I do, and I think she’s going to have a great career, but I don’t think she is the right fit for this championship.

3. She may have stuck to the middle of the pack for the start of the competition, but Naomi Smalls has risen to the top. Part of me wishes she would’ve been cast a few years from now. Would she have been even sharper? Could she have been unstoppable? She has such respect for drag that you get the impression she’s always giving 100 percent. When it comes to serving fashion, Naomi can slay with the best of them. She may be Drag Race’s finest poser, and she’s fought hard to measure up on comedy, dancing and characters. Had Violet — another young, high-fashion queen — not taken the crown last season, I might be more enthused to see a Naomi win.

4. Au revoir, Chi Chi. It was a valiant effort. Unfortunately, it just wasn’t meant to be. In this tight top four, everyone has to be best in class. Bob is for sure one of the world’s best comedy queens, Kim is one of the top look queens, and even Naomi is a powerhouse poser. I don’t know if Chi Chi could out-dance, say, Alyssa Edwards or Kennedy Davenport. She is good, but this season demands greatness. I’m glad she came as far as she did, and I really hope this platform gives her career a nice boost.

What do you think of the Top 4?