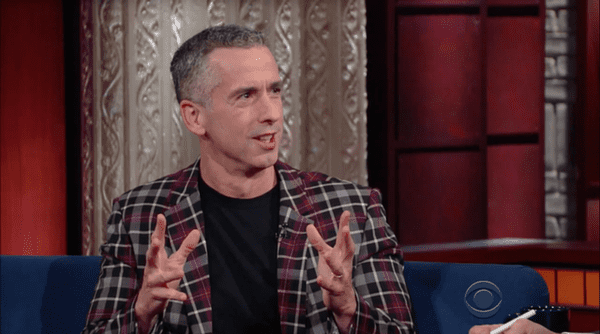 Dan Savage appeared on The Late Show with Stephen Colbert on Monday night to talk about LGBTQ equality, Donald Trump, and Hillary Clinton.

He first talked about the at-times confusing and seemingly ever-expanding acronym [LGBTQ(IA etc.)] for the queer community, joking that pretty soon we’ll just be singing the alphabet song.

He then turned to the 2016 election. On why he’s worried about a Trump presidency and what that would mean for queer people: “He’s promised to put people on the Supreme Court who will overturn marriage equality and forcibly divorce me from my husband because that’s pro-marriage. So I don’t trust Trump in the long term.”

The contrast with Clinton, he says, could be not be starker: “Hillary Clinton is good on LGBT issues, she’s excellent on them.” When prompted about her evolution on LGBT rights, Savage says,

“She wasn’t always good on gay marriage, but neither was Barack Obama…When you go to somebody, go to a politician, and you say, ‘Please change your mind,’ when they change their mind, you don’t then spend the rest of their lives going, ‘F*ck you for not changing your mind sooner!’ You say, ‘Welcome to the right side of this issue, we’re glad to have you.'”