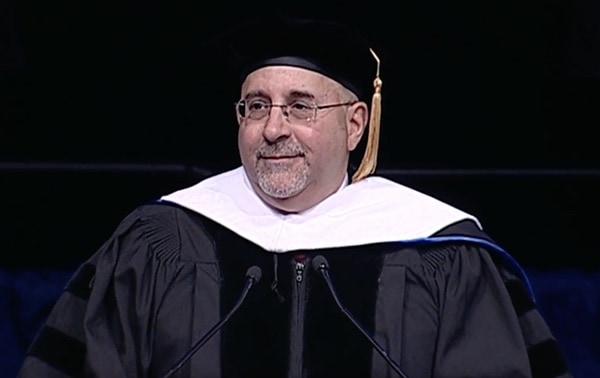 Freedom to Marry founder and president Evan Wolfson delivered this commencement address to Northeastern Illinois University graduates on May 9.

President Hahs, Members of the Board of Trustees, Faculty, the entire NEIU family –– Thank you for including me in this inspiring ceremony today.

Even as recently as five years ago, let alone in the years in which you all were born, the idea that a gay activist campaigning for the freedom to marry would be chosen by a state school in Illinois as its commencement speaker would have seemed inconceivable to most people.

Within living memory, gay people in America were a despised and oppressed minority, discriminated against under the law, stigmatized by prejudice and stereotypes, marginal to those in power, forced into hiding, paying brutal life consequences of exclusion, indignity, and disdain.

Non-gay people were taught that gay people were alien others bearing the classic tropes of dehumanization: a menace to children, animalistic in behavior, immoral, ill, and subversive.

In waves of fear and political exploitation, gay people were alternately (and inconsistently) labeled as somehow both pathetically weak and dangerously predatory – a threat to the family, to society, and to America.

But the story of America, our country, is that despite its flaws and imperfections, its falling short of its promise, We, the People, can form a more perfect union. We can speak out and organize and work. We can help our sisters and brothers, our fellow citizens, rise to the better angels of their nature. We can create and claim power, come together, and achieve democratic change.

And so through struggle and sacrifice and stumbles; through many noisy battles and millions of quiet conversations; through a winning combination of the Constitution’s human-rights guarantees, a decades-long movement, a successful strategy, and a tenacious campaign; determined Americans, gay and non-gay together, took the very thing that defined how gay people were discriminated against – our love – and by claiming the preeminent language of love – marriage, changed hearts and minds, and then the law, and won the freedom to marry nationwide.

That transformation of law, this triumph of love, too, not so long ago, seemed inconceivable to most people.

And, of course, there was no marriage without… engagement.

It took us believing and reaching out, engaging non-gay people in conversation. It took trust that we could connect and that others would move. It took, as I said, a decades-long movement, a strategy, and a campaign – all three. It took hope and perseverance. It took work and time and faith to get our country where it needed to be.

And our work is still not over, as we harness the power of the marriage conversation to the work that still remains in ending discrimination and securing good lives for gay and transgender people across the United States and around the world.

Now some of you may be wondering, what does this have to do with you and today’s celebration of your hard work, your achievements, your future?

Well, you, the Class of 2016, are about to graduate, about to receive degrees, from a school ranked the most ethnically diverse regional public university in the Midwest.

Northeastern Illinois University proudly proclaims as its mission: “We prepare a diverse community of students for leadership and service in our region and in a dynamic multicultural world.”

They’re talking about you.

Northeastern declares: “More than a hundred countries are represented in our student body. Nearly 50 languages other than English are spoken as a first language by our students.”

I’m from New York City, the most diverse city in the most diverse country on earth. I’m a New Yorker, I’m Jewish, and I’m gay, so naturally I love Broadway. The hottest show on Broadway right now, the coolest soundtrack playing nationwide, is Lin-Manuel Miranda’s Grammy- and Pulitzer-Prize-winning new musical, Hamilton.

In Hamilton, a multiracial cast riffs on our nation’s founding through multicultural music – the story of America then told by America now.

“Immigrants / We get the job done,” the musical reminds us – and it begins the story of the immigrant Alexander Hamilton’s life with a question:

How does a bastard, orphan, son of a whore and a Scotsman,  dropped in the middle of a
Forgotten spot in the Caribbean by providence,
Impoverished, in squalor,
Grow up to be a hero and a scholar?
The ten-dollar founding father without a father
Got a lot farther by working a lot harder
By being a lot smarter
By being a self-starter.”

“Get your education” – Hamilton is told – “don’t forget from whence you came, and the world’s gonna know your name.”

The show celebrates America’s history of immigration, of inventiveness, of self-improvement, of meritocratic rise, of e pluribus unum.

It also invokes America’s history of nasty political combat, of discrimination and division, of repression and racism, of suspicion and sexism, of imperfection.

With all that imperfection, however, the United States belongs to all of us – immigrant and indigenous – regardless of race, sex, sexual orientation, or gender identity.

America is us. And it is We, the People who have to, as another song from Hamilton, puts it, “Work.”

“Enable us to guard for the least among us the freedom we covet for ourselves; make us ill-content with the inequalities of opportunity which still prevail among us. Preserve our union against all the divisions of race and class which threaten it,” the greatest president of the 20th century, Franklin Roosevelt, exhorted yet another generation of Americans at yet another national moment of doubt, difficulties, and destiny.

FDR instructed his generation that: “We must scrupulously guard the civil rights and civil liberties of all citizens, whatever their background.  We must remember that any oppression, any injustice, any hatred is a wedge designed to attack our civilization.”

The promise of our Constitution, of our country, is something we Americans, of every generation, in every century, have always had to work for.

True to life, the musical Hamilton also portrays how even the most accomplished people – indeed, all human beings – are flawed. Even the greatest are sometimes undone by their flaws, and we see in the show and – in our own lives – how important it is to have not just one’s work, one’s achievement, but family, friends, love.

Hamilton’s life-story, much like a commencement ceremony, celebrates both independence and interdependence.

The poet chosen to speak at President Obama’s second inauguration, Richard Blanco, proclaimed:“Every story begins inside a story that’s already begun by others.”

Blanco was the youngest person to be named U.S. inaugural poet, the first immigrant, the first Latino, the first openly gay person. He later composed a special poem in honor of Freedom to Marry, the campaign I led, marking the 10th anniversary of gay people finally being able to marry in the United States.

The person chosen to give the keynote speech at the Democratic Convention at which President Obama was nominated for a second term was San Antonio Mayor Julian Castro. Mayor Castro declared: “The American dream is not a sprint, or even a marathon, but a relay.  Our families don’t always cross the finish line in the span of one generation, but each generation passes on to the next the fruits of their labor.”

Mayor Castro served as a chair of our Mayors for the Freedom to Marry public education campaign.

On those historic, solemn, political occasions, both speakers took the time to remind those listening that each of us is part of something bigger.

All of us owe a debt to others: our fellow citizens, our friends, our family.

So today it is fitting that, as we celebrate you and your hard work and talent and achievement, you in turn join in celebrating – and thanking – those in your life who sacrificed and supported you, so you could ascend and achieve.

Please take this moment now to thank, with your hugs and applause, your parents, your life-partners, your siblings, your family members, your mentors, your teachers, your classmates, your university, your community – all of whom are part of who you are, your dreams, and what you’ve accomplished.

I don’t have to tell you here today that gay and transgender people are not the only people in America to have faced discrimination, to endure prejudice, to be labeled as a menace, to be treated as “lesser” or “other.”

I don’t have to tell you that there are a lot of things still wrong in our country, a lot of ugly rhetoric, dysfunctional politics, and injustice; a lot of work left to be done.

I don’t have to tell you that we need to come together, not build walls; we need teamwork and talent, not division; we need investment, not selfishness.

I don’t have to tell you that immigrants built this country; that black lives matter; that women should be in charge of their own bodies and lives, and should lead; that everyone should pay their fair share – and be able to vote; that each person should be free to pursue happiness; that we all should be judged not by our external attributes, but by the content of our character.

The challenges are many, and right now there is nothing America needs more than a “diverse community of students prepared for leadership and service in a dynamic multicultural world.”

Happily, there is no challenge we face now in America that cannot be met and overcome by a “diverse community of students prepared for leadership and service in a dynamic multicultural world.”

NEIU graduates – your own journeys, your families, your hard work, and this school have prepared you for what George Bernard Shaw called “the true joy of life, the being used up for a purpose recognized by yourself as a mighty one; being a force of nature instead of a feverish, selfish little clot of ailments and grievances, complaining that the world will not devote itself to making you happy.”

“I am of the opinion that my life belongs to the community,” Shaw wrote, “and as long as I live, it is my privilege to do for it what I can.”

In the musical, Alexander Hamilton sings:

“I’m just like my country;
I’m young, scrappy and hungry,
And I’m not throwin’ away my shot.”

Northeastern Illinois University Class of 2016 – you’ve worked hard and you’re about to graduate.

It’s about time. We need you. Your country needs you.

The world, America, a future of challenge and hope… all are waiting for your engagement, your service, your leadership.

Take your shot. You’ve earned it.