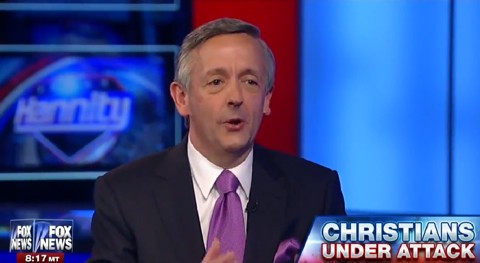 Dallas’ LGBT community center is calling on the city’s Police Department to reassess its recently announced partnership with First Baptist Church, in response to Pastor Robert Jeffress’ recent assertion that LGBT-friendly businesses are a bigger threat to the US than the terror group ISIS.

Jeffress, who has a long history of anti-gay remarks, made the comments last week on “Washington Watch,” a weekly radio program of the Family Research Council, an anti-LGBT hate group.

“It comes down to money, Todd, that’s what it’s about,” Jeffress told right-wing commentator Todd Starnes, who was hosting the show. “And when states are being faced with the loss of business, they tend to fold real quickly. And I’ve said often that the greatest threat to freedom of religion in America is not ISIS, it’s the Chamber of Commerce. I mean, it’s the businesses that say to our representatives, ‘Oh, don’t pass laws like that, don’t pass these religious freedom laws because people will interpret that as anti-gay and we’ll lose business.’”

Resource Center, Dallas’ LGBT community center, issued a statement Monday saying although Jeffress’ comments don’t deserve a response, the Police Department should consider ending the partnership, which was announced by Chief David Brown last month prior to a “Back the Blue” day at the church.

“Our concern is with the alliance announced last month between DPD and the church, which has a history of making inflammatory remarks about women, Islam, the Catholic Church and the broader lesbian, gay, bisexual and transgender (LGBT) community,” the center said. “Dallas Police, as does the city of Dallas, has a responsibility to be an open and inclusive organization that serves all people as reflected in the city’s internal and external nondiscrimination statements. The Center believes the city of Dallas must make decisions and take actions that are consistent with those values. The partnership with First Baptist Church of Dallas fails that test.”

Even before Jeffress’ comparison between LGBT-friendly businesses and ISIS, some had raised concerns about the new relationship between Jeffress and Chief Brown, who’s recently faced calls to resign from police associations as violent crime continues to rise in the city — including a series of anti-gay attacks.

“The only logical explanation is that [Brown] feels that politically this is going to benefit him in some kind of way,” African-American civil rights advocate Anthony Bond told WFAA-TV.

Previous Post: « Graduation Thoughts — and a Bit of Rapping — for the Class of 2016
Next Post: MLB to Investigate the San Diego Padres’ Gay Chorus Disaster »