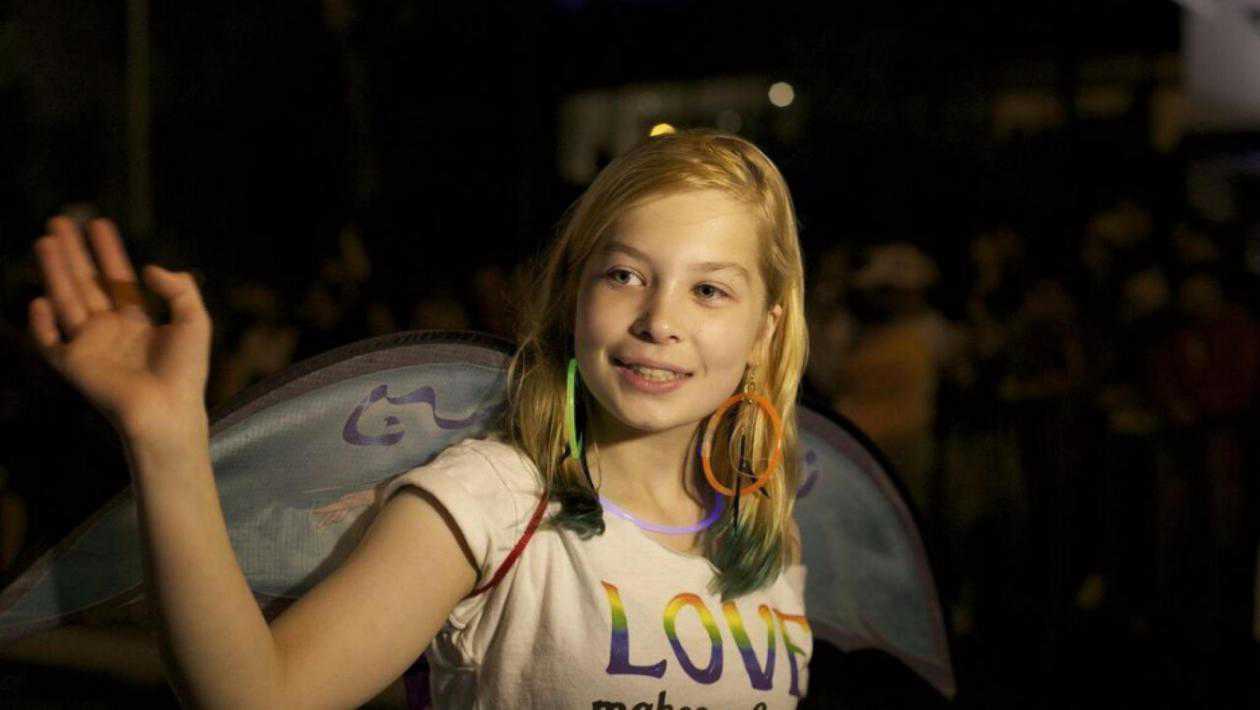 In August 2015, the Australian documentary “Gayby Baby,” which follows the stories of four children raised in same-sex families, made the front page of Sydney’s Daily Telegraph with the headline “Gay Class Uproar.” Above it, the tagline read, “Parents outraged as Sydney school swaps lessons for PC movie session.”

“When you get six phone calls from your publicist at 5 in the morning, something must be wrong,” says director Maya Newell. Along with her former film school classmate, producer Charlotte Mars, she spent four years getting to know the families in the film.

“Gayby Baby,” which will be available on streaming services May 1, is about Gus, an energetic 10-year-old whose mothers are concerned about his growing obsession with the hyper-macho world of wrestling; Ebony, 12, a talented singer who dreams of getting into a prestigious performing arts high school; 11-year-old Graham, a shy kid who was neglected by his birth parents and only now, with the help of his adoptive dads, is learning how to read; and Matt, a precocious 11-year-old who is questioning his mother’s devout faith in God.

Director Newell, raised by lesbian parents herself — her biological father, a friend of her mom, donated sperm — remembers the impact the 2010 film “The Kids Are All Right” had on her. It was the first time she had ever seen a family resembling hers represented in the mainstream media. When she set out to make her own documentary feature, she wanted to shine the spotlight on the kids, whose voices are often left out of the often heated political debates surrounding gay marriage and adoption.

After “Gayby Baby” had its premiere at Canada’s Hot Docs Film Festival, it only made sense to Newell and producer Mars that the kids in the film be able to share their stories with other kids their age. So they decided to host special previews of the film at schools before it was released in theaters. They worked with about 40 schools across Australia, including Newell’s alma mater Burwood Girls High, and planned to screen it on Aug. 28, 2015, as part of the nationwide Wear It Purple Day campaign, which promotes sexual acceptance among youth and raises awareness of anti-LGBT bullying. 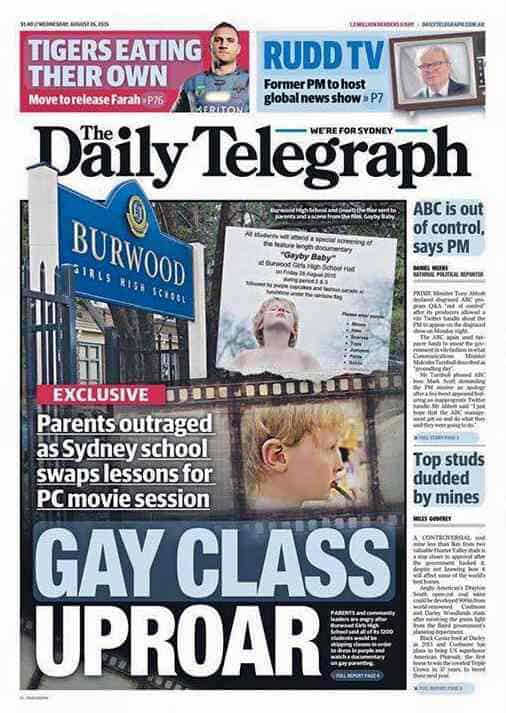 But that was before New South Wales Education Minister Adrian Piccoli issued a memo to the state’s principals banning every public school in the state from screening “Gayby Baby” during school hours. And that’s when Gus’ face appeared on the front cover of the Daily Telegraph as a symbol of the “gay class uproar” controversy.

First-time feature filmmakers Newell and Mars quickly began receiving congratulations that their film was getting national attention. But they were horrified.

“There were kids that had never been bullied before, who were bullied that day at school because of that headline and what these politicians were saying,” says Newell.

“You have the leadership deciding that our film does not belong in schools, which is effectively saying that our families don’t belong there either,” says Mars.

Most frustrating to the filmmakers was that it was coming from critics who they say hadn’t seen the film and assumed it had a political agenda.

“The question we often get as kids [of LGBT parents] is: ‘What’s it like being raised by two moms? How’s it different?” says Newell. “And it’s like, ‘Different than what?’ Like everything, some things are different and some things are the same.”

Gus’ parents don’t like that their son play-wrestles his much younger sister to tears. They turn it into a conversation about how roughhousing is okay, but a type of masculinity that often mistreats women and queer people is not. Ebony’s desire to get accepted to the performing arts school is partially motivated by her hope of being in an environment where her family will be accepted, but personal goals are put on a backburner as her baby brother’s seizures land him in the hospital. Graham, who desperately wants to read so he can fit in with his new classmates, is being advised by his dads to lie about his fathers’ relationship for fear of intolerance. Matt admits to his priest that one of the main reasons he’s questioning God is because the Church tells him that his lesbian mothers are sinners.

According to the Daily Telegraph article, parents were upset that their children were asked to wear purple, that they were asked to not only watch but support a documentary on gay parenting in place of regular classes.

“Schools are supposed to be neutral and cannot propagate a political view,” Presbyterian Minister Mark Powell said. Islamic spiritual leader Imam Mohammad Trad said he thinks the issue of gay parents should be a private conversation between parents and their children.

Despite the backlash, the “Gayby Baby” filmmakers have had many supporters along the way. Their initial crowdfunding campaign to make the film raised over $100,000, which, at the time, was the most any single film project had crowdfunded in Australia. After the controversy, high-profile supporters and politicians stood up for them, including Australian politician Penny Wong, who penned an op-ed for The Guardian.

“Talking about others’ sexuality or attacking 12 year olds are priorities for some, but it’s hard to comprehend how either could be more important than preventing bullying and keeping our children safe,” wrote Wong, who has two children with her lesbian partner. “I’d encourage them to turn down the outrage and watch the film. They might learn something from these kids about respect, love and tolerance.”

Newell and Mars launched The Gayby Project, an outreach program in association with the film, which targets discriminatory legislation and aims to be an online resource that supports diverse families. In the last year, they’ve been privately showing their film to political power players hoping to help make change.

“The legislation is important, but it’s just the first step,” says Newell. “The next step is the cultural shift of how people perceive LGBT people and their families, and in many ways, that’s much more difficult. But that’s where storytelling really helps.”

“When my mother came out, my grandmother was devastated because she thought it meant that her daughter would never have a family and that she would lead a lonely barren life,” says Newell, who counts herself as part of a growing international community of “gayby boomers.” “So one of the greatest responses we’ve had has been people who’ve come up to us and say that after watching the movie, they really wanted to start a family.”

The May 1 streaming video release of “Gayby Baby” coincides with International Family Equality Day. Newell and Mars are partnering with LGBT and family equality organizations worldwide to both host theatrical screenings and participate in a digital viewing parties. For more on the film and The Gayby Baby Project, visit their website.

This story first published on PRI.org.