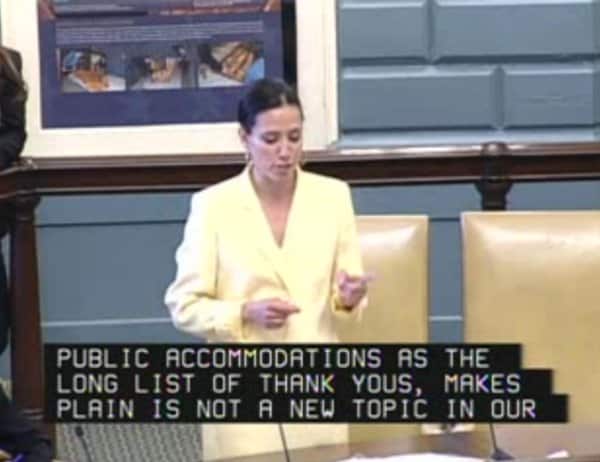 Senate Bill 735 passed by a wide margin of 33 to 4 and is expected to pass the House.

"In Massachusetts we are civil rights pioneers by nature" – Sen. Sonia Chang-Diaz in opening comments on transgender rights bill.

“It is our responsibility to advance these provisions when there is clearly evidence that transgender people can and are being discriminated against,” Senate President Stanley Rosenberg, a Democrat, told BuzzFeed News before the vote.

The bill appears poised to pass the House and reach the governor’s desk.

House Speaker Robert A. DeLeo told reporters last week that he likes the bill as passed by a joint judiciary committee, suggesting he is prepared to bring the legislation to a floor vote.

While Republican Governor Charlie Baker had initially signaled ambivalence on the bill (which led to him being booed off stage at an LGBT event), he appears more favorably disposed to the bill at present:

Lizzy Guyton, a spokesman for Baker, told BuzzFeed News in a statement that the governor “will carefully review a bill should the legislature act,” adding that he “believes no one should be discriminated against based on gender identity.” The governor also supports existing state laws banning transgender discrimination in housing and employment, Guyton added.