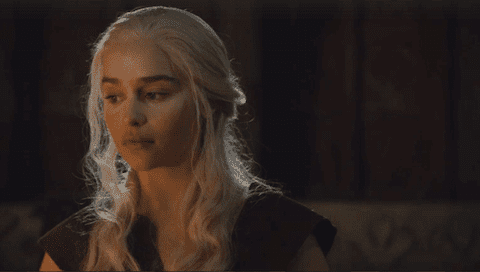 I’ll get right to it: I loved last night’s episode of Game of Thrones, “Book of the Stranger.” There were huge moments to celebrate, exciting plans put in place and a climatic finish that had me yelling “YAS KHALEESI!” at my screen.

Indeed, last night was all about sisters doing it for themselves.

Find out where the women of Westeros stand in our SPOILER-filled recap below. 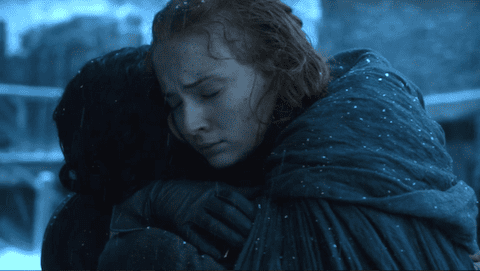 Jon Snow is packing up his things, putting his hair up in a man bun and getting ready to leave Castle Black for warmer southern climates. He’s like a Night’s Watch retiree, just trying to get a condo and a little sun, maybe some rattan furniture. Before he can set out for his own Westerosi Golden Girls-esque spin-off, there’s a knock at the door.

After so many seasons of teased reunions, hints and misses, finally, Sansa arrives and embraces her half-brother. Even though we didn’t even really see these two interact way back in season one, seeing some of the scattered Starks reunite gave me goosebumps.

Now that they’re together, what comes next? Sansa is determined to reclaim Winterfell, but Jon’s le tired of fighting. Sansa’s not hearing it, though. She pretty much just wants him to have a nap, then fire ze missiles (R.I.P. 2003). Jon’s shaken from his apathy when a threatening letter comes from Ramsay Bolton that tells him basically “All your Rickon are belong to us.” The Warden of the North invites Snow to come return Sansa, check out his sweet new direwolf rug and witness all the many disgusting things he plans on doing to whatever Starks he could get his hands on before he scoops out Jon’s eyes and feeds him to the hounds. Not the Winterfell Tourism Board’s best brochure, but it’s enough to convince Jon to make a visit to his former home.

At some point Ramsay, the most vile character, will meet his end, and I can’t help but try to imagine the most gratifying comeuppance to befall him. I want Sansa to be responsible, but it likely won’t be her who does the actual killing. I could, however, see her get her revenge by commanding Brienne to do the deed. If she doesn’t have a hand in his death, I hope she at least releases a surprise album about what a jerk he was (#CitrusAle). Hey, it’s my fantasy. 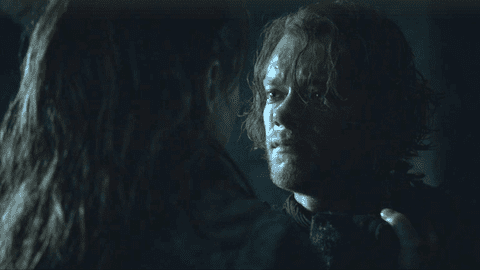 A second set of siblings, Yara and Theon, are reunited. Yara’s not too pleased to see him at first. The last time she saw him, her rescue attempt cost many men their lives only for Theon — still in full Reek mode — to refuse to leave Ramsay. So, Yara doesn’t have a ton of sympathy for him, especially now that he’s conveniently showed up just in time for them to name a new King. He tells her that he supports her bid to rule the Iron Islands at the upcoming Kingsmoot. On the one hand, #imwithher, but, on the other, granting Theon the ability to send the Ironborn military forces to Jon Snow’s battle with Ramsay could be just the thing to redeem a character that’s been through so very much. It’s a way for him to atone to the Starks and to play a role in Ramsay’s demise. 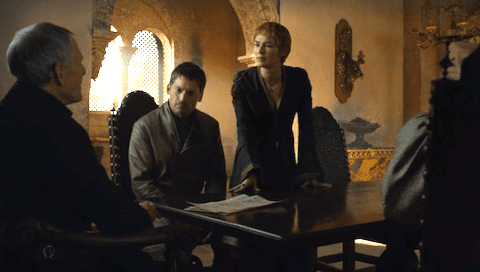 Our third set of siblings to come together are the poor prisoners of the High Sparrow, Margaery and Loras Tyrell. Margaery is rewarded a visit with her brother for sitting through the High Sparrow’s origin story (he was a cobbler, then he was a fancier cobbler, then he gave up all the fine food and women and money to serve a higher purpose). Loras is in much worse shape than Margaery. When she tries to rally him to stay strong, he begs her to just do whatever will make his punishment stop.

Elsewhere, Cersei and Jaime crash a meeting with Uncle Kevan and Lady Olenna to hatch a plan. Cersei tells Olenna the king has heard from the High Sparrow that Margaery will soon make her walk of shame, which Olenna is not pleased to hear. Instead, the Lannister siblings suggest the Tyrell army storm the city and overtake the Sparrows. Their plan can’t be that simple, though. Why introduce the idea of a trial by combat with the Mountain if they could just as easily kill the High Sparrow and reclaim the city by force? Will Cersei really be satisfied with the Tyrell’s saving King’s Landing?

And let’s not forget, all this uproar would certainly make King’s Landing ripe for a Dornish attack, no? 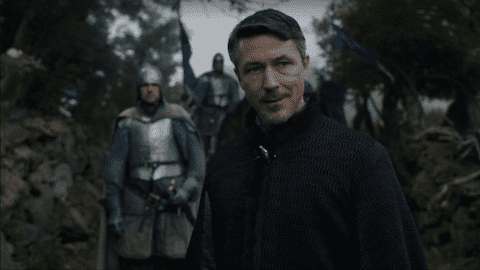 The young weirdo Robin Arryn (you know, the one who breastfed way too long and has a thing for the Moon Door) is chilling out max and relaxing all cool with Lord Royce when Littlefinger comes a riding up. Baylish gives Robin a bit of a fib about how the Boltons swept in and kidnapped him and Sansa, but now Sansa has escaped, and maybe they should go help her? Robin agrees to deploy the Knights of the Vale to protect his cousin. If Jon Snow could muster the Night’s Watch, the Wildlings, the Ironborn and the Knights of the Vale, suddenly he’s got quite the army to overtake the Boltons, even before you factor in other northerners that are still loyal to the Starks. Though, it’s hard to imagine Littlefinger doesn’t still have a larger scheme. 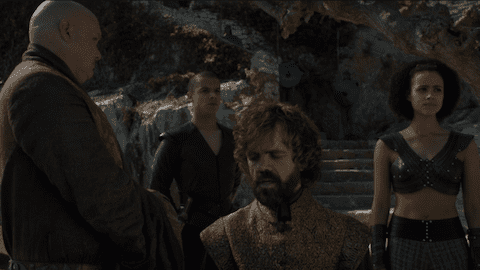 Tyrion is getting ready to meet with the masters of Slaver’s Bay, but, it’s cool, he totally gets the whole slave experience, because he was once briefly a slave for a few days. Missandei and Grey Worm are like, dude, check your privilege, but Tyrion is confident. If there’s one thing he’s good at, it’s politicking. During the meeting, Tryion offers a great compromise: They’ll abolish slavery, sure, but not like right now. Maybe they can slowly phase it out over the next seven or so years? Missandei and Grey Worm find this solution to be #problematic to say the least, but they lend their support to Tyrion when he’s questioned by Meereen’s citizens growing anxious about Daenerys’ absence. Looks like Tyrion may find himself on the wrong side of history here. 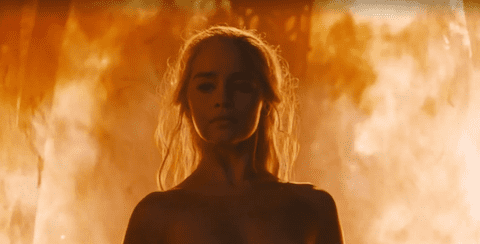 Jorah and Daario are tiptoeing around the outskirts of Vaes Dothrak. How are these two going to infiltrate the Dothraki when they are so vastly outnumbered? Someone needs to save Daenerys!

She’s killing time with the other widows, when she excuses herself to the little khaleesis’ room outside. A young widow accompanies her, and the two of them become fast friends. Jorah and Daario surprise them, but before they can kill the young widow, Daenerys stops them. She looks at the young widow and basically asks her “No snitching?” to which she agrees, “No snitching.” Daeny tells Jorah and Daario that there’s no chance they’d escape all these Dothraki, but she has a plan. Is it Drogon?! I hope it’s Drogon. Someone needs to save Daenerys. Maybe it’ll be Drogon!

Later, Daenerys faces the leading Dothraki men. They wonder if they should sell her for some horses or keep her with the other widows. Daenerys is like, hey, you know what, I’ve got a third option, why don’t I just rule the Dothraki? To which everyone has a big laugh at even the suggestion. Daeny is undeterred. She saunters around the very flammable hut they’re all in, caressing the torches lighting the room. The men had enough of Daeny’s attitude and threaten to rape her many times over. She keeps her composure, and then, oops, knocks over one of the torches, setting the room ablaze. The men rush toward her and, oops, there goes another. Then another and one more until the whole place is engulfed in flames. The men can’t escape, because Daario and Jorah locked them in. The Dothraki gather around the blaze and see Daenerys emerge from the flames naked, but unscathed, and they drop to their knees.

No one needs to rescue Daenerys. She’s got this covered.

Now, fans of the book are all up in arms over this last scene, because Thrones creator George R. R. Martin has asserted very definitively that the Targaryen are not actually immune to fire, but that one time Daenerys survived Khal Drogo’s pyre was just a special circumstance. Sorry, nerds, but who cares? I found Daenerys fiery act of strength to be immensely satisfying after watching her fumble with the Sons of the Harpy as leader in Meereen. Her speech before going all Lisa Left-Eye Lopes on the Dothraki was a nice reminder that before Khal Drogo died, the plan was to reclaim the Iron Throne. With the Dothraki back under her command, it’s time to get back to that mission.