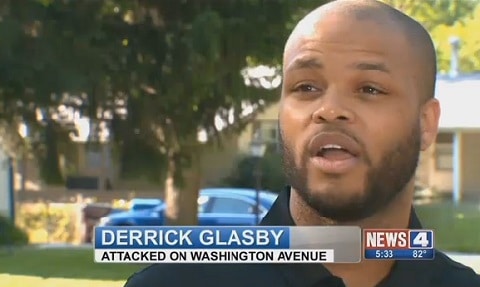 A Missouri man who was punched and kicked in an attack last Friday says he was targeted because he is gay.

Derrick Glasby says the attack started as he was leaving work on Washington Avenue, St. Louis. When Glasby said hello to a friend he saw on the street, he alleges that a man came out of nowhere and punched his friend while yelling gay slurs. Glasby says that when he came to his friend’s aid he was attacked by around four men who started kicking and punching him in the middle of the street.

He said that although one woman attempted to intervene, nobody else came to his rescue:

“I saw cameras out.  People were recording.  No one was helping.  No one was trying to stop the situation.  It’s heartbreaking because after all the stuff St. Louis has been through we should come together in unity – or just to stop the violence period.”

Glasby will undergo surgery this week to repair a fractured jaw. Police unsuccessfully searched the area for the assailants following the attack.

Watch a report on the attack below.