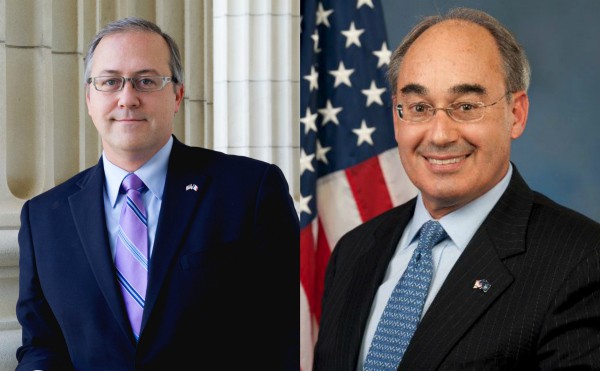 Democrats are vowing retribution against the Republican congressmen who switched their votes on Rep. Sean Patrick Maloney’s amendment to a defense spending authorization bill that would have prevented federal funds from going to contractors who don’t comply with President Obama’s order on LGBT discrimination.

In particular, Democrats plan to go after representatives who face tough re-election bids this November.

The total list of Republican representatives who switched sides is as follows:

According to a Democratic leadership aide, they were able to identify which Republicans changed votes using a computer on the floor that prints updates of vote results as they occur. Democrats were able to compare the printouts to see who switched positions.

Of the seven, Young, Poliquin, Denham and Valadao are among Democrats’ biggest targets this election cycle. And Democrats see the vote-switching as a prime way to counter those Republicans’ claims of independence from their leadership and paint them as hiding their actions from the public.

[…] An official for House Democrats’ campaign arm, the Democratic Congressional Campaign Committee (DCCC), told The Hill that the vote is expected to become a major issue in a competitive race like Young’s. Nonpartisan political prognosticators like the Cook Political Report and Sabato’s Crystal Ball rate Young’s district as a “toss up.”

“This type of extreme partisanship is something we should expect from someone who has never held a job outside of Congress,” Mowrer said in a statement. “This is why we need new representation in Congress and why I believe so strongly in putting service to Iowans ahead of politics.”

Poliquin has denied he voted against the amendment, saying, “I abhor discrimination in any form and at any place.”

That hasn’t stopped Emily Cain, his Democratic challenger, from going after him. In a statement issued Friday, Cain said, Congressman Poliquin apparently has no moral compass on the issue of discrimination. But what’s truly disappointing is that Congressman Poliquin didn’t come clean with voters, but instead reversed himself in secret as part of a backroom deal with Republican leadership.”

Denham and Valadao are reportedly also vulnerable, though not as much as so Cook and Polquin.

Previous Post: « Missouri Man Says He Was Viciously Attacked Because He Is Gay: VIDEO
Next Post: Ireland Is An Epic Emotional Mess On Marriage Referendum Anniversary: VIDEO »