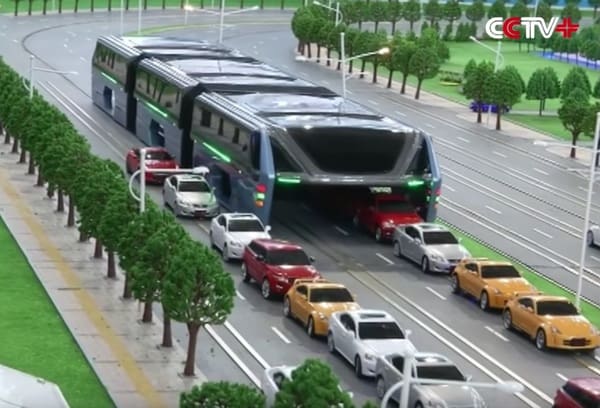 Traffic is a huge problem in most urban areas but China’s is legendary. Now, a Beijing company has designed this futuristic bus which would take the place of up to 40 conventional buses, and glides over the top of traffic jams on rails. It’s still conceptual at this point.

The “straddling bus”, which owes more to Blade Runner than China’s car-clogged highways, is supported by two legs that run along rails laid along the roadside.

Those legs allow the TEB’s giant frame to glide high above the gridlock at speeds of up to 60km per hour. Equally, vehicles that are less than two metres high will be able to drive freely underneath the bus, even when it is stationary.

“The biggest advantage is that the bus will save lots of road space,” Song Youzhou, the project’s chief engineer, told Xinhua, China’s official news agency.

Song claimed his buses, capable of transporting up to 1,400 commuters, could be produced for 20% of the price of an underground train and rolled out far more quickly since the supporting infrastructure was relatively simple.

However, questions still remain as to how safe the TEB will be, considering the scale model at the expo used only cars and not tall and heavy vehicles such as trucks and vans, to demonstrate how it would work.

The demo model also lacked safety barriers that separated the cars from the bus, raising safety concerns on traffic collisions which are already common throughout the country’s roads.