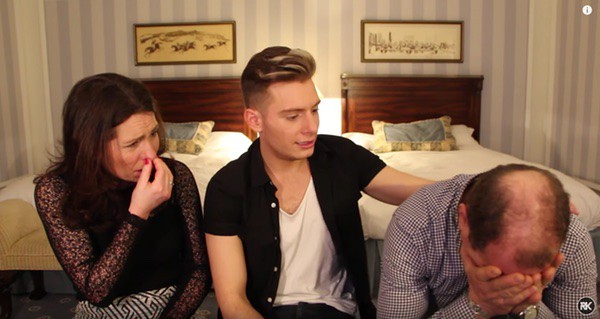 Gay YouTuber RiyadhK sat down with his parents Lorraine and Sam to talk about his coming out but had no idea that his father was about to confess that he tried to kill himself over his son’s revelations.

The clip manages to be devastating, heartbreaking, and instructive all at once. For parents hoping to get some guidance on dealing with kids who are gay, this one is a must-watch.

Said Sam about a note his son had left him, explaining that he is gay:

“I read it and I was like, waiting to sink in. ‘Really? No, it can’t be. Is it?’ It was just so confusing, because something just hits you like, bang! And you’re not really expecting it, and you’ll be thinking of what to do…and the family…”

Collecting himself, Sam added, “What I’m thinking is for every mother and father, if they love their kid, you have to stand by them.”

“I remember it was tough for you,” added Riyadh.

Riyadh’s statement seemed to push Sam to open up further:

‘I actually got up that night at  – after you all went to sleep – about 3 or 4 in the morning, and I was looking for a tablet to commit suicide. That’s why I say it was so stupid.”

Previous Post: « Dangerous When Wet: A Gay Man’s Struggle with Booze, Sex, and His Mother
Next Post: New Chinese Bus is Designed to Eat Traffic Jams for Lunch: WATCH »