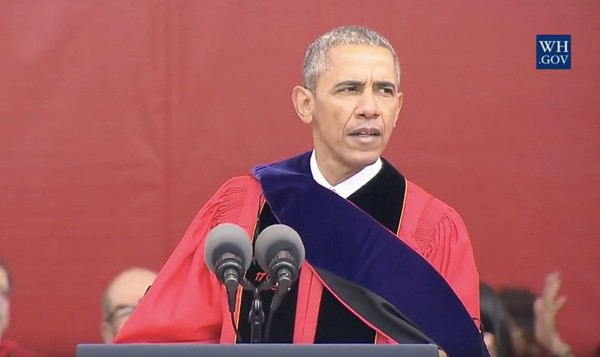 President Obama delivered the commencement address at Rutgers University yesterday and once again showed what a talented orator he is. He also took aim at Donald Trump, though didn’t mention him by name.

We traditionally have valued those things.  But if you were listening to today’s political debate, you might wonder where this strain of anti-intellectualism came from.  (Applause.)  So, Class of 2016, let me be as clear as I can be.  In politics and in life, ignorance is not a virtue.  (Applause.)  It’s not cool to not know what you’re talking about.  (Applause.)  That’s not keeping it real, or telling it like it is.  (Laughter.)  That’s not challenging political correctness.  That’s just not knowing what you’re talking about.  (Applause.)  And yet, we’ve become confused about this.

Look, our nation’s Founders — Franklin, Madison, Hamilton, Jefferson — they were born of the Enlightenment.  They sought to escape superstition, and sectarianism, and tribalism, and no-nothingness.  (Applause.)  They believed in rational thought and experimentation, and the capacity of informed citizens to master our own fates.  That is embedded in our constitutional design.  That spirit informed our inventors and our explorers, the Edisons and the Wright Brothers, and the George Washington Carvers and the Grace Hoppers, and the Norman Borlaugs and the Steve Jobses.  That’s what built this country.

And today, in every phone in one of your pockets — (laughter) — we have access to more information than at any time in human history, at a touch of a button.  But, ironically, the flood of information hasn’t made us more discerning of the truth. In some ways, it’s just made us more confident in our ignorance. (Applause.)  We assume whatever is on the web must be true.  We search for sites that just reinforce our own predispositions. Opinions masquerade as facts.  The wildest conspiracy theories are taken for gospel.

Now, understand, I am sure you’ve learned during your years of college — and if not, you will learn soon — that there are a whole lot of folks who are book smart and have no common sense.  (Applause.)  That’s the truth.  You’ll meet them if you haven’t already.  (Laughter.)  So the fact that they’ve got a fancy degree — you got to talk to them to see whether they know what they’re talking about.  (Laughter.)  Qualities like kindness and compassion, honesty, hard work — they often matter more than technical skills or know-how.  (Applause.)

But when our leaders express a disdain for facts, when they’re not held accountable for repeating falsehoods and just making stuff up, while actual experts are dismissed as elitists, then we’ve got a problem.  (Applause.)

Watch the whole speech (excerpted portion above begins at 21:38):