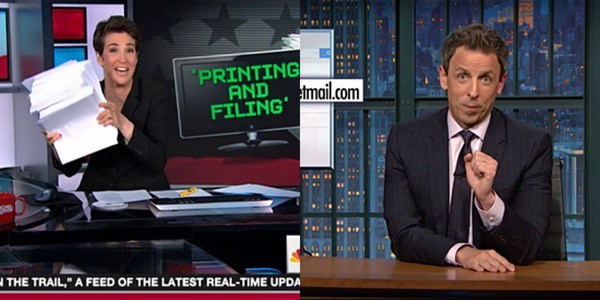 Rachel Maddow and Seth Meyers both took a look at the ‘Hillary Clinton email scandal’ this week following the release of a report from the State Department’s Inspector General that found Clinton violated State Department rules in how she handled her emails. The report also found that other past secretaries of state including Collin Powell violated the rules as well.

Meyers dug into the controversy on Thursday night during his “A Closer Look” segment. Underscoring Clinton’s repeated contrition on having used a personal email server, Meyers joked that Clinton “is clearly doing her best to not scream, ‘What more do you people want from me?'” He added, “The only way this scandal could be more boring is if Wolf Blitzer talked about it.” And then he proved it…with Wolf Blitzer talking about it.

When it comes to the actual protocol that Hillary Clinton was supposed to follow regarding her emails, both Meyers and Maddow highlighted the absurdity of current State Department regulations.

Said Meyers, “She literally had to print out each individual email and file it away. Even worse, every time she texted someone an emoji, she had to take a picture of herself making that expression and fax it to Congress.”

Maddow was confounded by the protocol, summing it up, “Every single email sent or received needs to be printed out, taken off the printer, dropped into a box. And I’m not exaggerating. It’s the exact system. And it’s the only system approved by the rules…The State Department acknowledges this is not a great system.”

To prove how absurd the protocol is, Maddow printed out every email she had sent or received this week. The sum of three days of emails amounted to a giant stack. “And I’m not Secretary of State,” Maddow said.

Meanwhile, the US government is still using 8 inch floppy disks to run the nuclear program.

Watch both Meyers’ and Maddow’s takes, below.