If you experience extreme deja vu at the movie’s this weekend, don’t panic – that’s just how summer movies play. Take X-MEN APOCALYPSE for example. The sixth film in the X-Men franchise will feel very familiar if you’ve seen any X-pictures before. And maybe even if you haven’t. So let us begin (again) with a short detour.

Oscar Isaac is the internet’s current boyfriend and an amazing actor and as is required by the law of desire he’s in everything now. He was used sparingly but potently in The Force Awakens last Christmas as dashing pilot Poe Dameron and he’s in theaters again in a much larger role as the big bad of X-Men Apocalypse.

A few scenes into Star Wars: Episode 7 – The Force Awakens we see Oscar strapped to a chair and bleeding. A slender masked bad guy named Kylo Ren is holding him captive and enters his mind using The Force to extract information.

In the first scene of X-Men Episode 6 aka  X-Men Apocalypse we see Oscar strapped to a stone slab and not bleeding (even if you cut him open the wound instantly heals). A hulking ugly bad guy named Apocalypse is holding him captive and enters his body — not like that (!) It’s PG-13 —  using Ancient Rituals / Mutant Powers to extract that healing power. And also to possess his gorgeous body. It turns out Apocalypse has done this many times before and is becoming all powerful.

Are you following? I know it’s confusing but my point is this: If every franchise film would like to tie Oscar Isaac up at the beginning of the movie so that we may forcibly ogle him, this is understandable and aesthetically warranted and we shall forgive all such repetitions. 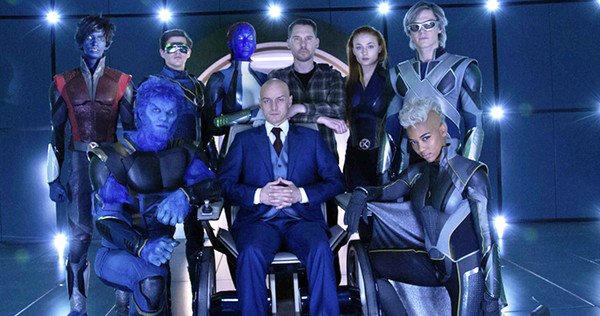 As it happens, though, this is Oscar Isaac’s last good scene in X-Men Apocalypse because once he’s been possessed, he is transformed into looking just like that ugly villain who possessed him. That last thing you want to do when you hire an “it” actor is to bury their beautiful mug in inexpressive latex. You’re only hurting yourself, movie!

After that prologue there’s a popcorn fun credit sequence that speeds through key moments in history, albeit slightly altered to include mutants (which might remind you of the alternate history credits sequence of another superhero movie called Watchmen from 2009), to bring us up to date.

Up to date in this case is the 1980s. We know this because the movie tells us and also because Nightcrawler is wearing Michael Jackson’s Thriller jacket and Jean Grey and Cyclops are going to see Return of the Jedi in movie theaters.

Other things that happen in the movie, you’ll remember from previous X-Men movies: The bad guy tries to use Xavier’s mutant locating machine Cerebro to kill everyone, Wolverine has a berserker rage, the X-Men find Nightcrawler and bring him to Xavier’s school, and the movie drops hints that Jean Grey’s powers are growing and she’ll soon be the far more dangerous Dark Phoenix ALL of which also happened in X2 back in 2003.

Quicksilver gets a crowd-pleasing complete song sequence to super speed around in while the world is frozen, Mystique can’t quite believe people love her in her natural blue form, and Xavier tries to convince Magneto that he has good inside him ‘so, like, please stop killing people!’  as we previously saw in X-Men First Class in 2011 and/or  X-Men Days of Future Past in 2014.

And director Bryan Singer is still trying to use the mutant struggle as an allegory for civil rights while awkwardly showing a complete lack of interest in diversity (unless you count blue people) and wasting Storm yet again. She’s a hugely important and fan beloved character in the comic books and six movies in she’s still completely disposable.

The “new” plot is super complicated but boils down to this sentence: Apocalypse reemerges, enlists flipflopping hero/villain Magneto to help him, and will destroy the world unless the X-Men can stop him.

Honest highly-agitated question: Why do they keep making the same movie about, essentially, the same four characters (Magneto, Professor Xavier, Mystique, and Wolverine… who mercifully sits most of this one out) when there are years and years of printed material to work with and multiple fascinating characters to explore from a book that’s always featured a truly diverse ensemble and never been primarily about three white men and their blue lady?

In the 7th film, as hinted by this movie’s finale, it looks like the franchise will reexplore the “Dark Phoenix” saga which they already botched in X-Men: The Last Stand in 2006.

My mutant power is apparently being a killjoy.  (Aside: There are good movies out in the summer time but you generally have to seek them out since they’re not on 4,000 screens. You must see Sing Street  which is completely endearing,The Lobster which is ballsy and original and A Bigger Splash which is on fire with sexual charisma.)

It’s not that X-Men Apocalypse isn’t fun in spots. It has its big colorful spectacle moments. And some of the visuals are so outlandish that they’re at least as memorable as they are silly.

But it’s also uninspired, largely incoherent, has a dull all-powerful villain with dumb looking powers (something about killing people with sand?) and is entirely weightless in its overreach (Oh, the world is ending again? *shrug*) probably because it’s not grounded with careful characterizations or any consistency beyond repetition.

Thanks to Marvel Studios (who do not control the X-Men films since the rights were sold to Fox years ago) the superhero genre has changed a lot since the X-Men first got the big screen treatment in 2000.

The genre now features very tightly developed characterizations (see the Captain America films), drama with an eye on the long game, complex action sequences that extend way beyond CGI beams crashing into each other, regular introductions of new heroes to play with (Guardians of the Galaxy, the ever expanding Avengers team, and Doctor Strange this November) and stays mostly true to the various source materials in terms of character, powers, tone, and general guiding principles.

By contrast X-Men Apocalypse feels like it was made before the superhero boom. It’s the one super-franchise that’s frozen in time, and not just because they yelled “do-over” by traveling backwards in it.