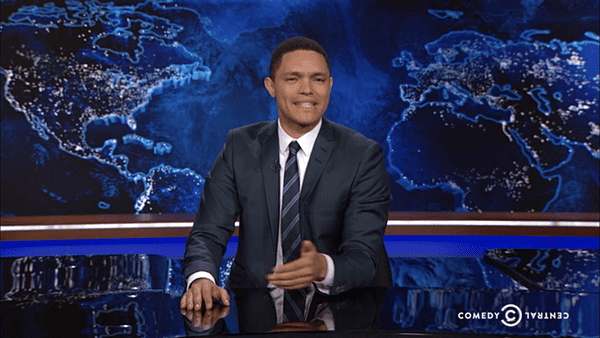 Noah went down the list of the many arguments being used by opponents of transgender bathroom rights, beginning with the de-bunked theory that if you allow transgender people the right to use the bathroom that matches their gender identity, you create a loophole whereby male “predators” can enter into women’s restrooms. Said Noah, “That’s what perverts have been waiting for, loopholes. Guys out there are like, ‘Man, I want to flash people in the bathroom so badly, when are they going to change the laws?’”

As for concerns about “privacy”, Noah noted that we all have to give up a little bit of privacy to be members of society. “I’m not comfortable being in the bathroom with an exposed penis,” Noah said. “And I’m a man. No one likes being around a penis they didn’t plan to see.” However, “There are certain types of privacy we forgo…When I go to the gym I have to accept the fact that in the changing room there may be a man standing there blow drying his balls. I don’t want to see that. Nobody wants to see that!”

Noah also underscored how right-wing fear mongers are focused on the wrong issue:

Noah argues that while there may be discomfort for some in accepting transgender rights, discomfort is part of progress. And while you might think that transgender acceptance has been progressing quickly, that belief ignores the struggles transgender people have faced for years and are only now seeing changes take place:

“Just imagine for a second being a 55-year-old trans woman and you’ve lived your entire life worried about bathrooms and locker rooms. The only thing trans people are saying right now is, ‘What took you guys so long? Because I feel like I’ve been holding it forever.'”

Previous Post: « Celine Dion Releases Queen Classic ‘The Show Must Go On’ – LISTEN
Next Post: Seth Meyers Takes a Closer Look at the War Between Clinton and Sanders Supporters: WATCH »