HELLO, GORGEOUS. Barbra Streisand sings “At The Ballet” from A Chorus Line with Anne Hathaway and Daisy Ridley.

POLLS. Clinton has 11 point advantage over Trump in new national poll from Reuters: “The online poll, conducted from Monday to Friday, shows 46 percent of likely voters support Clinton while 34.8 percent back Trump. Another 19.2 percent support neither candidate. Their parties hold conventions in July ahead of a Nov. 8 election.” 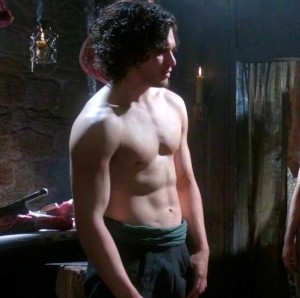 PATRICIA CLARKSON. Actress isn’t having Kit Harington’s comments about objectification of male actors: “He’s a sex symbol. Get over it. You have an amazing career and you’re on a hot show. Take your shirt off.”

SIR IAN MCKELLEN. Actor says ‘Brexit makes no sense if you’re gay‘: “If I were to look at ‘in’ or ‘out’ from that point of view, there’s only one point, which is to stay. If you’re a gay person, you’re an internationalist. I don’t want us to retract. I don’t want to and I won’t, whatever the vote happens to be.”

STAR-GAZING. Light pollution obscures the Milky Way from 80% of North Americans: “That’s according to a new atlas of artificial night sky brightness that found our home galaxy is now hidden from more than one-third of humanity. While there are countries where the majority of people still live under pristine, ink-black sky conditions — places such as Chad, Central African Republic and Madagascar — more than 99 percent of the people living in the U.S. and Europe look up and see light-polluted skies.”

HAMILTONYS. Morgan Reynolds parodies the “Schuyler Sisters” ahead of the Tony’s this weekend. Will it be a sweep for Hamilton?

DALLAS. Police open fire at man who charged them with a rock at Dallas’ Love Field Airport: “The airport was briefly placed on lockdown because a number of people who had been waiting to get through security when the shots erupted ran past the TSA workers to get away from the mayhem, Dallas Assistant Chief of Police Randall Blankenbaker said.”

RIP. Muhammad Ali has been laid to rest: “An interfaith memorial service for three-time heavyweight boxing champion Muhammad Ali began in Louisville, Kentucky, on Friday, as thousands gathered to say goodbye to the boxing legend and activist, who’d been buried earlier on Friday. Will Smith and Mike Tyson were among the pall bearers.  Former President Bill Clinton, Billy Crystal and Bryant Gumbel were scheduled to give eulogies for the boxing legend.”

NINA TURNER. Sanders surrogate: “It’s easy for Democrats to attack Mr. Trump. You don’t get any brownie points from me and other progressives for getting into a Twitter war with Mr. Donald Trump. That’s easy.”