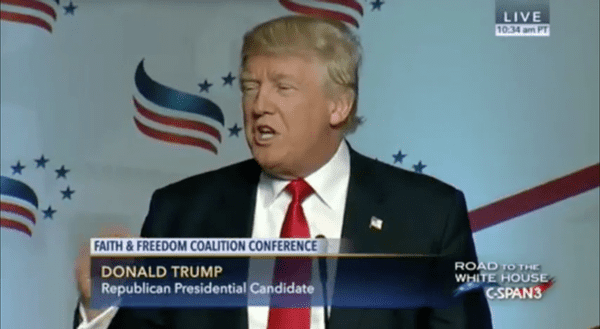 At a speech in Washington, DC on Friday, presumptive Republican presidential nominee Donald Trump promised to defend Christian values, including ‘marriage, and family.’

Trump told the evangelical Faith and Freedom Coalition, “I’m with you 100 percent.”

Trump told the crowd gathered at the Omni Shoreham hotel and convention center in Washington, D.C. “We will respect and defend Christian Americans. “ He added that he would work hard to advance “our shared values.”

Trump told the mostly evangelical attendees that he would pursue a conservative agenda if elected. The businessman expressed his opposition to abortion, support for Israel and his intention to nominate conservative judges to federal courts, as he generally stuck to themes familiar to the GOP’s religious base. “Marriage and family as building block of happiness and success,” he said.