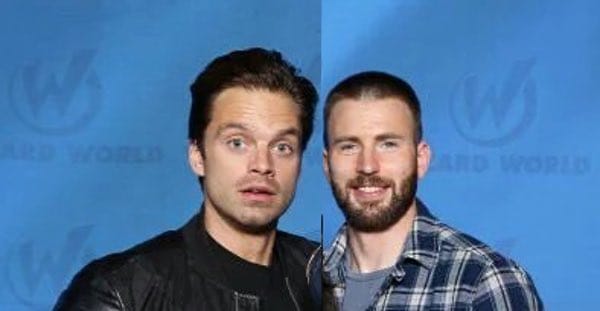 If you have been fantasizing about what would happen if Marvel decided to #GiveCaptainAmericaABoyfriend, then you will likely appreciate the entrepreneurial spirt of two cosplay fans who recently posed for a picture with Chris Evans and Sebastian Stan.

Evans and Stan of course play Captain America and Bucky/The Winter Soldier in the Marvel superhero movies. And many fans have pointed out that the relationship these two share is stronger than any heterosexual relationship in the Cap’s movies.

To give the world a glimpse of what Captain America/Winter Solider slash fiction would look like come to life, two as yet unidentified fans posed for a picture with the actors at Wizard World Philadelphia this past weekend and made out right in front of them.

Stan and Evans were greeted by two fans dressed as Bucky and Steve. The duo quickly engaged in a steamy lip-lock. While the move certainly stunned Stan, it looks like Evans approves of this unlikely pairing since he’s sporting a mischievous grin in the photo. Social media users have applauded the gesture.

Another fan tweeted the above image writing, “F****CK.”

Evans’ hand on cosplay Bucky’s arm as the pair kiss combined with that ‘mischievous grin’ is perfection.

Now, if we could just get Marvel on board with the big screen adaptation…

Previous Post: « Bob The Drag Queen Wants To Ensure You are ‘PrEP’-ared: WATCH
Next Post: Davey Wavey and 13 Queer YouTubers Share Why They Love Being Gay – WATCH »