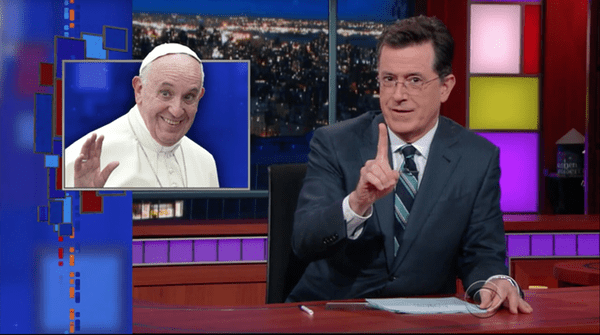 Stephen Colbert on Monday night brought up Pope Francis’s recent remarks about gay people in which he suggested that the church owes them an apology for fomenting anti-gay hatred.

Said Francis, “I believe that the church…should apologize to the person who is gay whom it has offended…”

As we reported, Francis made his remarks after being asked whether he agreed with German Cardinal Reinhard Marx, who first said the church should apologize to the gay community for having marginalized them.

Colbert, who is Catholic, said he is a big fan of Pope Francis because of what many consider to be his more progressive views on issues such as climate change. Colbert called the Pope’s latest remarks “another bombshell.”

Said Colbert, “It is a huge step to admit that the church should apologize to the person who is gay. Next step, admitting that there’s more than one of them.”

Colbert called Francis’s comments “a huge moment” for the church in terms of “accepting homosexuality.”

He then went on to share some of the Pope’s lesser apologies that got buried with his ‘big gay apology.’