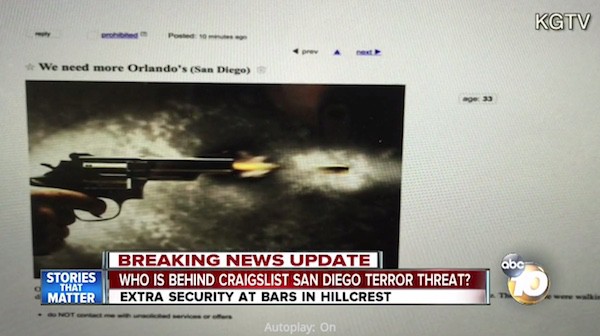 Police are investigating a threat posted to Craigslist of an Orlando-style attack against San Diego’s LGBT community, ABC 10 reports:

A 10News viewer saw the post in the men-seeking-men section of the Craigslist San Diego personal ads. He took a screenshot and sent it to 10News before the post was flagged and removed.

The post is titled “We need more Orlando’s (sic),” and it is accompanied by a photo of a hand firing a revolver with a bullet coming out of the barrel.

The post read: “Orlando was long overdue. Cleanse your community of the filth that gives decent gay men and women a bad name. Those people were walking diseases, bug chasers, and thank god for AIDS and 9-11 and now Orlando. San Diego you are next …”

10News sent the screenshot to the San Diego Police Department and the FBI.