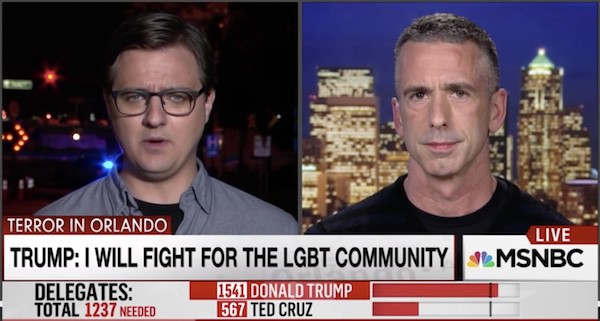 Dan Savage appeared on All In with Chris Hayes last night in the wake of the Orlando shooting and was asked about several aspects of what has happened in the days following – namely, the way Donald Trump has tried to take advantage of the situation for his own political benefit, and the news that the shooter may have been a gay man.

Said Hayes: “You know, Trump unveiled this new line of attack in the speech the other day, which is basically almost an importation of a certain kind of European right-wing politics. We saw it with Pim Fortuyn who was a Dutch politician. Basically saying, I am an ally of LGBT people because I will be the most anti-Muslim candidate, essentially. What’s your reaction to watching him try to essentially pit these two constituencies against each other?”

When asked about the potential that Omar Mateen was a gay man, Savage replied:

“Self-loathing violent closet case and radicalized religious extremist are not mutually exclusive categories. There are a lot of self-loathing queer people out there. Most of them are self-loathing because of religion, because of the zap religion put on their heads. So he could be both of those things.”