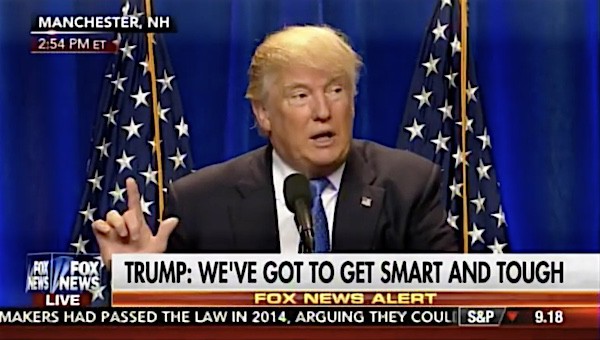 In a speech in Manchester, New Hampshire today, Donald Trump used the massacre of dozens of LGBT people at Orlando’s Pulse nightclub to promote his bigoted immigration policies and attack Hillary Clinton, claiming he is a better friend to women and the LGBT community.

“This shooter, and amazingly, in Orlando was the child of an immigrant father who supported one of the most repressive regimes on earth. Why would we admit people who support violent hatred? Hillary Clinton can never claim to be a friend of the gay community as long as she supports immigration policies that bring Islamic extremists to our country and who suppress women, gays, and anyone else who doesn’t share their views or values.”

“Ask yourself who is really the friend of women and the LGBT community. Donald Trump with actions, or Hillary Clinton with her words? I will tell you who the better friend is and someday I believe that will be proven out bigly.”

Trump went on to add Obama to that list:

“He is no friend to the LGBT community. He is no friend. And at a moment like this when a leader should put their personal ambitions and their partisan differences aside, or just shut up, but if they choose to speak out, they should be speaking from a place of unity and a place of sympathy and talking about building bridges. And I would tell you, Wolf, I bet there is not a single family member or friend or brother or sister or girlfriend or boyfriend that is suffering from this great loss that found any comfort in what Donald Trump had to say today. Instead, he was up there bragging about the fact that he claims he predicted this.”