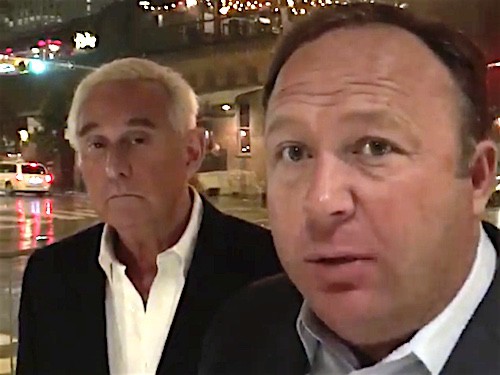 Stone claims that a forthcoming “hit piece” from the Washington Post plans to smear Trump with gay rumors and allegations he used cocaine.

Says Stone in the interview: “I was personally approached by the Washington Post, they asked me to speak to a reporter on a background basis about what I might know about Trump….Did I ever attend parties where Donald Trump used cocaine? Folks, Donald Trump has never used drugs in his life. The man doesn’t even take aspirin….Did he have girlfriends on the side, today or previously? The answer is no. Yes, during the time he was unmarried, he was a ladies man. He did date many beautiful models, but the answer is no….

Stone is not a typical political adviser, and when the press treats him as one they miss out on a key election story: the extremism of Trump’s supporters. Stone’s decades-long history of dirty tricks includes playing a role in Watergate that later caused him to be fired from a job in the Senate. He has a record of racist andmisogynistic rhetoric that caused MSNBC and CNN to ban him from their networks. Stone also regularly callsfor public figures to be executed.

Stone’s history of extremism is particularly relevant for readers when he is quoted discussing the Clintons. Stone has alleged that the Clintons are “plausibly responsible” for the deaths of roughly 40 people, including John F. Kennedy Jr. He has also claimed that Bill Clinton is not Chelsea Clinton’s real father. In 2008, he ran ananti-Hillary Clinton group that went by the acronym “C.U.N.T.”

Previous Post: « Police Officer Performs ‘I Will Survive’ at Gay Bar After Being Called for a Disturbance: WATCH
Next Post: Governor Bryant’s Anti-Gay Cake Order Was Just Approved: WATCH »