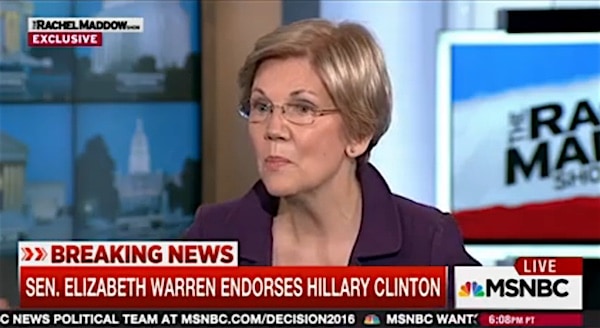 Elizabeth Warren’s political star is shining fiercely at the moment and yesterday was a huge day for the Massachusetts senator as she endorsed Hillary Clinton on The Rachel Maddow Show following a gripping, captivating speech at the ACS convention (posted below) in which she destroyed Donald Trump.

But first, her endorsement:

“I’m ready. I am ready to get in this fight and work my heart out for Hillary Clinton to become President of the United States and to make sure that Donald Trump never gets any place closet to the White House.”

Why wait so long?

“I thought that the primary was really important and it was an opportunity for Democrats to get out there and show, this is what it means to be a Democrat. We got out there and pushed those issues forward and we made sure the American people saw the kind of thinking we have, the kind of energy we have, and what makes us very different from those guys on the other side.”

When asked about the threat of Trump, Warren begins:

Asks Maddow: “Do you have  a prescription for how this primary should end?”

“It’s clear now that we need to start thinking about all of us together…Hillary Clinton won. She won because she’s a fighter. She’s out there. She’s tough. And I think this is what we need. Look at who she is. Fror 25 years she has been taking the incomings. The right wing has thrown everything they possibly can at her. And what does she do? A lot of people would just hang up their spurs. They’d say, you know I’ve had enough of this. And she doesn’t. What she does is she gets back up and she gets back in the fight…You ought to be willing to throw a punch. There are a lot of things people say about Hillary Clinton, but nobody says she doesn’t know how to throw a punch.”

Maddow then highlight a few clips from Warren’s searing speech earlier in the evening at the American Constitution Society in which she eviscerated Donald Trump.

Here’s the full speech to the American Constitution Society. And it’s a MUST WATCH.

Finally, Maddow asks if Clinton has talked to her or her people about being the running mate.

“No,” says Warren. No conversations have taken place about that.

When asked if conversations take place between Warren and the other political leaders on a personal level,  Warren really lit on fire.

What gives it power is the power within the idea itself, and the fact that others care about it.

There are so many more people on our side. And I’m not just talking Democrats here. You talk about those core issues, about Social Security, about college, about raising the minimum wage, about reining in Wall Street.

You look at those core issues and somewhere between 60 percent and 75 percent of all of America, that’s Democrats, Republicans, independents, libertarians, vegetarians. They sign up and say, yes, I’m for that.

So, the question is then, Rachel — why hasn’t that happened? Why hasn’t it happened?