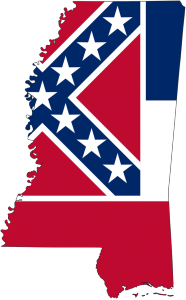 A federal judge in Mississippi has ruled that county clerks cannot cite their own religious beliefs as a valid legal reason to deny issuing marriage licenses to same-sex couples.

The ruling guts part of Mississippi’s HB 1523, one of the worst religious freedom bills to be passed to date in the United States.

[U.S. District Judge Carlton] Reeves is extending his previous order that overturned Mississippi’s ban on same-sex marriage. He says circuit clerks are required to provide equal treatment for all couples, gay or straight.

Reeves has not yet ruled in two other lawsuits seeking to block all of the religious objections law, including provisions that could affect schools’ bathroom policies for transgender students.

Previous Post: « Watch These Bros Learn How to Really Play Fantasy Football – VIDEO
Next Post: The British Are Coming … To Bake You A Cake, Plus More TV This Week »