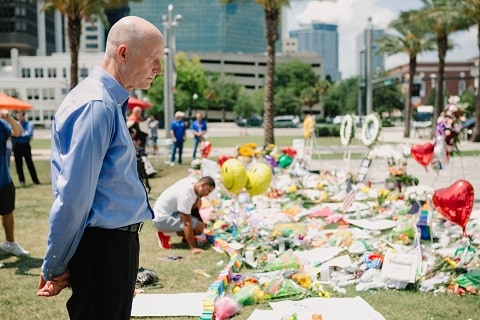 Florida Governor Rick Scott paid tribute to the 49 victims of the massacre at an Orlando gay nightclub last weekend, labeling the mass shooting as an attack on “the gays.”

Scott reiterated that statement when asked by The Washington Blade if he had a message for the LGBT community. He added, “This was an attack, what else can you say?” and “The biggest thing we do now is ask how to make sure this doesn’t happen again.” He also said it was “horrible” that Noor Mateen, who tried to talk shooter Omar Mateen out of carrying out the attack, did not report her husband to authorities.

Scott also posted a message on Twitter using the #OrlandoUnited. Though his history of gay rights obstruction did not go unnoticed by users on the social network.

You still fight gay rights in FL. How dare you pretend to care.Shame on you!Show u care by signing legislation for gay rights.

You are personally responsible for these 49 deaths and all the other murders in #Florida, where you worked to enable murder.

Scott also praised JetBlue for offering free flights to family members of the victims heading to Orlando for funerals. “I think the most important thing to do is first take care of all individuals impacted,” he said. “As a community, we’ve got to get back to work. As a country, how do we make sure this doesn’t happen? What do we do to stop that?”

Watch Scott address reporters on the day of the massacre, below.

Previous Post: « Trump Wanted to Win The LGBTQ Vote, Instead He Got The LGBTQ Shade
Next Post: Found Guilty of Murder as a Hate Crime, Elliot Morales Sentenced to 40 Years to Life in Prison: WATCH »