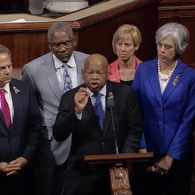 TO BE CONTINUED. House sit-in ends after 25 hours. “House Democrats led by civil rights legend Rep. John Lewis (D-Ga.) ended their action Thursday afternoon.Speaking to reporters outside the U.S. Capitol, Lewis said House Democrats would continue their efforts on July 5 when the House is back in session. ‘We’re going to continue on July 5, we’re going to continue to push, to pull, to stand up and, if necessary, to sit-down,’ Lewis said to applause.”

STOP HATE. Donald Trump is full of it. 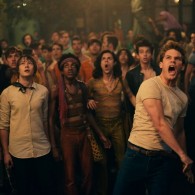 MUST-SEE GRAPHIC. Everything lawmakers said (and didn’t say) after the Orlando mass shooting.

PULSE. Latin Night resumes with street party: “The street party will take place about two miles away from the shuttered Pulse, and performers will dance and entertain throughout the night. Poma says the city has gone through a terrible and extraordinary ordeal and everyone must keep moving forward. She says her commitment is to keep Pulse alive and the party is a great way to start just that.”

SIGNORILE. The hate is still real after Orlando: “While it’s important to talk about the outpouring of support, we can’t let it seduce us into believing the hate isn’t still a very real and dangerous threat. That hate empowered the mass shooter to go into the Pulse nightclub. And that act is now empowering more haters to spread their hate. Now is the time to take our grief and sorrow, turn it into anger, and direct that anger into action against the preachers and politicians in Congress and across the country who are exploiting fear and hate, and keeping us from achieving full equality.” 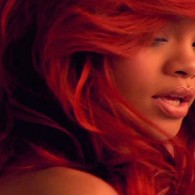 SILENCE. Rihanna, other stars slammed for saying nothing. “Asked about criticism that Rihanna has tweeted about her upcoming tour, but has yet to mention the Orlando shooting on any of her social media platforms, a publicist for the star told TheWrap: ‘I am honestly hoping that you’re NOT trying to take this tragedy and write a story about how Rihanna hasn’t tweeted‎ about it. I’m honestly going to pretend you didn’t write this email.'” 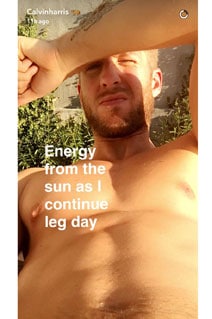 SCREAM QUEENS. Picking up male co-stars. “Following the news that John Stamos will be joining Scream Queens as a “brilliant but secretive” head of surgery for season two, it’s been announced that Taylor Lautner will also be joining the show’s medical personnel as a series regular. Lautner will portray Dr. Cassidy Cascade, a doctor at the hospital where the anthology series’ upcoming season is based — no more college campuses, sorry!”

SPOTMINI. The new Boston dynamics quadruped. “SpotMini is a new smaller version of the Spot robot, weighing 55 lbs dripping wet (65 lbs if you include its arm.) SpotMini is all-electric (no hydraulics) and runs for about 90 minutes on a charge, depending on what it is doing. SpotMini is one of the quietest robots we have ever built. It has a variety of sensors, including depth cameras, a solid state gyro (IMU) and proprioception sensors in the limbs. These sensors help with navigation and mobile manipulation. SpotMini performs some tasks autonomously, but often uses a human for high-level guidance.”