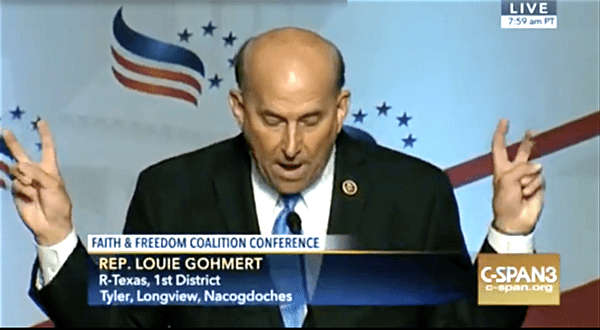 Texas Congressman Louie Gohmert attacked transgender troops in a speech given at the Faith & Freedom Coalition’s annual conference in Washington, D.C. on Friday. Gohmert air quoted the word “equality” when referring to “transgender equality” and characterized sex reassignment surgery as something that destroys people’s lives.

Gohmert made his remarks in reference to the Obama administration’s policies on transgender service members.

What’s the @GOP think of LGBTQ rights? They use air quotes when saying the word “equality”. pic.twitter.com/DRrB3S47UP

Gohmert used the term ‘gender dysphoria’ to launch into his attack on transgender troops, which he couched as a defense of veterans:

“[Gender dysphoria is] a generalized sense of dissatisfaction [with one’s gender] and for that you want to cut off people’s organs and destroy people’s lives? Now this administration says, ‘We’re going to have the V.A. do sex change operations.’ Really?! Do we not have enough veterans committing suicide without you increasing that 20 times? Enough is enough! We have to stand up for our veterans. We’re the adults. We have to stand up for our children.”

Watch video of Gohmert air-quoting “equality” and denouncing transgender rights (via RWW), below.