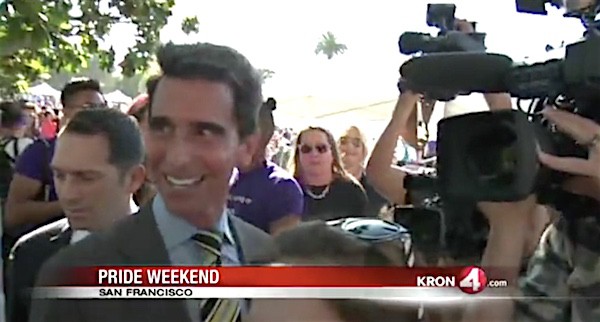 But he was mooned by a heckler and booed by several others. Openly gay state Sen. Leno was yelled off the stage, as was Scott Weiner, a member of the San Francisco Board of Supervisors and also openly gay, and Lee.

Lee and Weiner didn’t even have a chance to speak.

“Though this has not been a warm welcome or one of respect, I will continue to fight for transgender rights, equality, and the respect that you’re not giving us today,” Leno said.

The reason for the unwelcome reception?

“I’m upset because I’m a Trans woman who has a lot of Trans friends who are homeless, and I’m tired of people using our community as a prop, a political prop,” Ashley Love said. “I’m tired of white, gay men riding the Stonewall movie and reducing Trans women of color to secondary props, to historical props, to social props, political props. I’m tired of politicians coming here for 5 minutes, do a little sound bite, and run off, but do they really care about us?”

Unfortunately, the crowd didn’t find out if they cared or not, because they didn’t get a chance to speak.