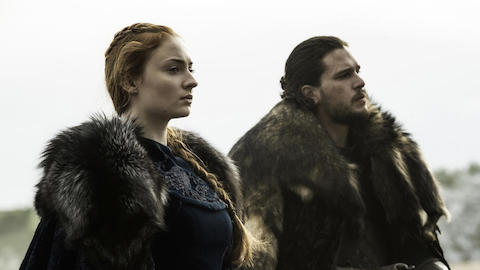 For an episode that was almost entirely predictable in terms of outcomes, last night’s episode of Game of Thrones, “Battle of the Bastards,” was a thrill to watch. Not only for the intense visual spectacle (it was the series’ most expensive episode to produce), but also because it pushed several fan-favorite characters to the forefront of the future of Westeros.

Want to know what happened? The rules are simple: Start running to the SPOILER-FILLED Game of Thrones recap below, and don’t look back. 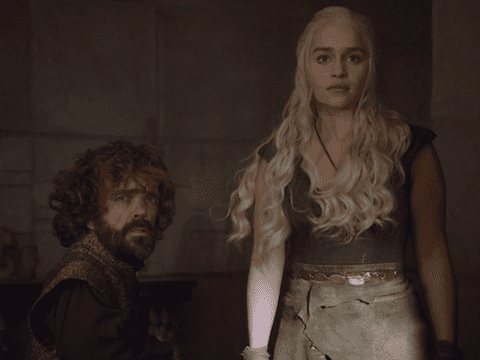 Tryion’s been called into the boss’s office, and she is not happy. Like any good underling, Ty tries to spin the city’s current situation — besieged by the masters and under attack — as somewhat positive. You know, sandwich compliments and all that. It’s like he’s reviewing last quarter’s TPS reports. Yes, the city is currently on fire, but, hey, look at the bright side, commerce is up, morale is high. This is just a natural reaction by the masters because Meereen is doing so awesome!

Dany’s can see through Tyrion’s spin. She’s got a very sound, if not totally ruthless plan to fix this: crucify the masters, burn all their ships and destroy their cities. Sound good, Tyrion?

Not exactly. Tyrion knows the danger of an unhinged Targaryen, so he reminds her about her own dear old dad. He tells her how he earned his moniker the Mad King by hoarding wildfire like people hoard old newspapers or cat skeletons so he could burn down King’s Landing. (Tyrion also outlined some of the key locations of the wildfire, including under the Great Sept of Baelor. This info might come in handy when we return to King’s Landing next week for Cersei’s trial. You know the rule of Chekhov’s wildfire — if you introduce wildfire in the first act, some crazy b is going to burn a city down in the season finale. Or something.)

Anyway, Tyrion’s point is that Dany doesn’t want to be like her dad, right? Why don’t they try a somewhat softer approach? (Or at least one that’s softer by Targaryen standards.)

So, Tyrion, Grey Worm, Missandei and Danerys reserve a conference room on a mountaintop and have a little meeting. They tell the slavers that they are here to negotiate terms of surrender. The slavers tell them to turn over the city, kill their dragons, let them sell the Unsullied to the highest bidders and so on. Dany shoots them one of her signature bemused looks, and basically is like imma let you finish, but I wasn’t talking about us surrendering; I was talking about you surrendering.

Then, on cue, here comes Drogon (gurl loves to make an entrance, amiright?). Dany hops on his back, does a lap around the city, on the way they grab  Rhaegal and Viserion, and descends upon the ships attacking the city. They make a scene flambéing one of the ships, which inspires a mass abandoning of the others. As for the Sons of the Harpy doing the dirty work on the ground, our fabulously golden masked insurgence is met by an angry bunch of Dothraki led by Daario. Thus ends the slavers’ rebellion.

That leaves the three leaders of the slavers sitting pretty on that old mountaintop with Tyrion, Grey Worm and Missandei. It’s their “Big mistake, big, huge” moment, but instead of waving their shopping bags around in the rude salesgirl’s face while wearing a fabulous hat, Tyrion and company say thanks for the ships and kill two of the three slavers for breaking their pact. For all the lies you told, this is what you owe.

With the city returned to Khaleesi’s control, the next meeting on Dany’s agenda is with the Greyjoy siblings, whom I guess caught the express to Meereen from the Iron Islands. Their proposal is simple enough: Dany can have the 100 ships they brought with them, and they will support her claim to the Iron Throne. All they ask is she helps them kill their uncle and install Yara as the independent ruler on the salt throne. Of course, Dany is a little curious why she should support these Greyjoys with only 100 ships, when their uncle Euron is coming to strike an alliance in exchange for 1000 ships. The answer is simple: His alliance would be predicated on marrying him (“and his big c*ck”). Danerys, long promising to break the wheel, isn’t interested in the old ways, ruled by violent old men, so she agrees to support Yara and create a Westeros ruled by #allthesingleladies. One small condition though, the Iron Islands need to stop acting like an off-brand Pirates of the Caribbean, ok? Deal!

But wait, does that mean Euron’s big c*ck is still up for grabs? 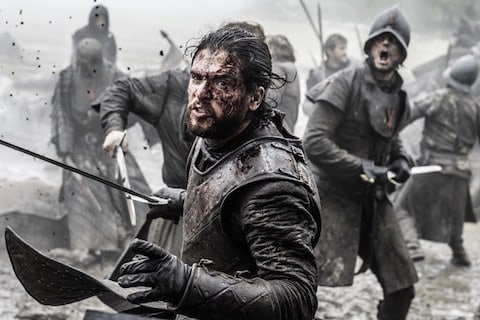 Here’s what we’ve been waiting for. It’s time for the battle between Bolton’s forces and Jon Snow’s motley crew. Before we start slinging swords and arrows, both sides meet for a little pre-war pow-wow.

Jon Snow lays out his proposal: You know what would be so fun? What if, I don’t know, just saying, we skip this whole battle thing, and you and I just sneak off somewhere and have a romantic battle, just the two of us?

Ramsay responds: Oh my god, that sounds amazing, and I would totally love to do that some other time, but right now it’s just not going to work for me, because I’ve got all these soldiers who already RSVP’d for the battle, and it’d be tacky to cancel so last minute. See you tomorrow, byeeeeeee!

Alright, so maybe that’s not exactly how it went down, but that’s the gist. Ramsay may be a lot of things, but a fool he is not. Bolton’s chances of beating Snow one-on-one are 50-50 at best, but he’s got more than double the soldiers, so he’ll settle this on the battlefield, athankyouverymuch. 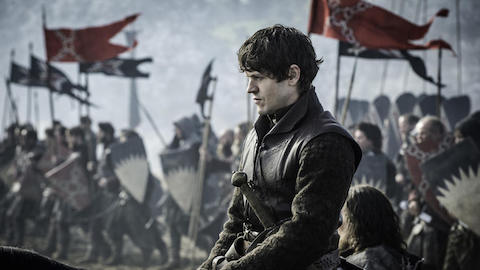 That evening, Jon, Tormund and Davos are doing that thing people do before battle where they move chess pieces or rocks or whatever around on a map to show that they are strategizing. The boys finish playing Stratego or whatever, leaving Jon alone with Sansa. She’s still not thrilled with how she’s been sort of phased out of the inner-cirlce here, especially when she’s the one that knows Ramsay best. She offers Jon her best advice: Don’t let him draw you into one of his twisted games. Also, don’t get your hopes up for Rickon.

Davos and Tormund take a moonlight stroll through camp, and they bond over the leaders they’ve lost in the past. They’ve gotten themselves into a lot of trouble following kings. Good thing Jon Snow is no king. They wrap up their little convo, as Davos wanders over to where Shireen was burned alive. He finds her stag figurine and realizes how she must have suffered.

Now for the battle itself. The two sides square off on opposite ends of the battlefield, and, as Sansa predicted, Ramsay does have a game in mind. He drags out little Rickon and instructs him to run toward his brother. The youngest Stark stumbles wildly toward Jon Snow while Ramsay draws his bow. Jon takes the bait like a dummy and races toward his youngest brother. The arrows — purposefully? — miss Rickon until he’s just short of Jon’s grasp. Then, when Jon’s drawn far from safety, Ramsay fires a lethal arrow straight through Rickon’s chest. 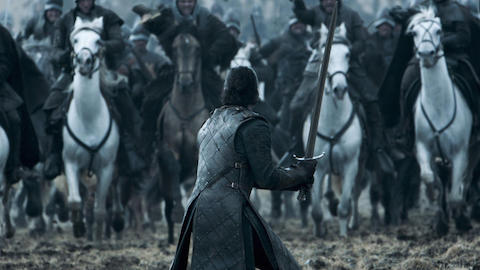 With Jon out in the open, Ramsay sends out his troops. Snow’s forces charge. A totally insane, visceral battle unfolds. Bodies are literally piling up into mountains. That’s when Ramsay calls in his phalanx — a term I had only previously understood as a part of the body or a cybernetic hive-mind that fought the X-Men. No, here, a phalanx is a group of soldiers moving closely together. Ramsay’s soldiers surround what’s left of Snow’s army with big shields and start moving in closer with their spears. It’s all very, OK, Boltons now let’s get in #formation, and we slay.

Many of Snow’s men make a mad dash over the mountain of dead bodies they’re backed up against, almost trampling and suffocating Jon Snow in one of the tensest moments of the night. Those that try to escape are met by Smalljon Umber and drawn into battle. It seems pretty hopeless for Snow’s men (and Tormund is getting a whooping from Umber) until they hear some horns in the distance. The calvary has arrived in the form of Littlefinger and the Knights of the Vale. Tormund takes a bite out of Umber, killing him while Littlefinger’s men finish off Bolton’s army. 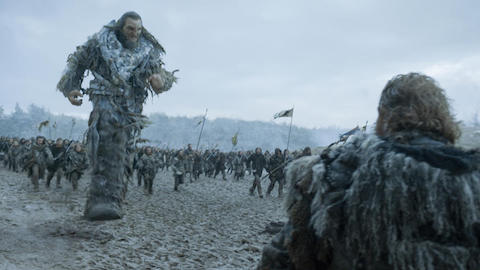 Ramsay can see the writing on the wall, so he turns tail for Winterfell with Jon Snow, Tormund and Wun Wun the giant in pursuit. We all know how giants are great to have around for all those times you forget your keys or when the garage door opener is on the fritz or when sadistic homicidal maniacs lock you out of your rightful home, so Wun Wun makes smashy-smashies his way in through the gates. It’s his final act of courage, because, by the time he makes it inside, he’s a pin cushion full of Bolton arrows. Just when you think he’s going to have one of those slow, touching deaths as he fades gracefully into the afterlife’s warm embrace, nope! Ramsay shoots him in the eye with an arrow, putting him down. Thanks a lot, Ramsay. You sure know how to ruin a moment.

Once inside, Ramsay has reconsidered Jon’s request for one-on-one combat. Ramsay fires some arrows, which Jon Snow catches in a shield before pouncing on him and pounding some justice in him. He doesn’t finish him off though, that’ll come later. Bolton’s men are cleared out, the Stark banners are put back up and it seems Jon Snow is now the Charles Bronson of Winterfell, taking back the streets and restoring order.

Later, Sansa finds Ramsay all tied up and bloody in a cell. Of course, if anyone deserves revenge on Ramsay, it’s her. She unleashes Ramsay’s hounds, which he’d been starving in anticipation of a victory on the battlefield. The dogs do the dirty work of disposing of the wretched, wretched Ramsay once and for all.

So where does this leave us? Well, for starters, the Starks are back in power in Winterfell. Sansa probably has the strongest claim to rule as Wardeness of the North, but I doubt Littlefinger’s aid comes without a price. We know he’s been playing a long game here, and it’s high time to figure out to what end.

Then there’s Daenerys. She’s got ships from the Greyjoys and the slavers. She’s got armies in the Unsullied, the Second Sons and the Dothraki. She’s got three dragons. She’s got a hot lezzie partner in crime (but, who knows, maybe also down the road, in other things). I mean, at this point, can anyone stop her from seizing the Iron Throne? Probably not. Then again, once the Night’s King and his icy army of the undead come storming in, will it even matter?

Don’t forget we’ve also got a trial to get through for Cersei and Ser Loras. Expect neither law nor order to prevail.

What did you think of last night’s episode of Game of Thrones?