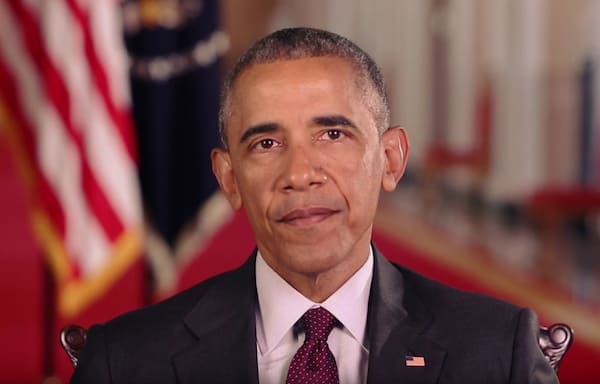 In the wake of the Orlando massacre, President Obama used his weekly address  to tell the LGBT community the nation stands by them, and delivered a message about tolerance, equality, and unconditional love ahead of Father’s Day.

It’s been less than a week since the deadliest mass shooting in American history. And foremost in all of our minds has been the loss and the grief felt by the people of Orlando, especially our friends who are lesbian, gay, bisexual, or transgender. I visited with the families of many of the victims on Thursday. And one thing I told them is that they’re not alone. The American people, and people all over the world, are standing with them – and we always will.

The investigation is ongoing, but we know that the killer was an angry and disturbed individual who took in extremist information and propaganda over the internet, and became radicalized. During his killing spree, he pledged allegiance to ISIL, a group that’s called on people around the world to attack innocent civilians.

We are and we will keep doing everything in our power to stop these kinds of attacks, and to ultimately destroy ISIL. The extraordinary people in our intelligence, military, homeland security, and law enforcement communities have already prevented many attacks, saved many lives, and we won’t let up.

Alongside the stories of bravery and healing and coming together over the past week, we’ve also seen a renewed focus on reducing gun violence. As I said a few days ago, being tough on terrorism requires more than talk. Being tough on terrorism, particularly the sorts of homegrown terrorism that we’ve seen now in Orlando and San Bernardino, means making it harder for people who want to kill Americans to get their hands on assault weapons that are capable of killing dozens of innocents as quickly as possible. That’s something I’ll continue to talk about in the weeks ahead.

It’s also part of something that I’ve been thinking a lot about this week – and that’s the responsibilities we have to each other. That’s certainly true with Father’s Day upon us.

I grew up without my father around. While I wonder what my life would have been like if he had been a greater presence, I’ve also tried extra hard to be a good dad for my own daughters. Like all dads, I worry about my girls’ safety all the time. Especially when we see preventable violence in places our sons and daughters go every day – their schools and houses of worship, movie theaters, nightclubs, as they get older. It’s unconscionable that we allow easy access to weapons of war in these places – and then, even after we see parents grieve for their children, the fact that we as a country do nothing to prevent the next heartbreak makes no sense.

So this past week, I’ve also thought a lot about dads and moms around the country who’ve had to explain to their children what happened in Orlando. Time and again, we’ve observed moments of silence for victims of terror and gun violence. Too often, those moments have been followed by months of silence. By inaction that is simply inexcusable. If we’re going to raise our kids in a safer, more loving world, we need to speak up for it. We need our kids to hear us speak up about the risks guns pose to our communities, and against a status quo that doesn’t make sense. They need to hear us say these things even when those who disagree are loud and are powerful. We need our kids to hear from us why tolerance and equality matter – about the times their absence has scarred our history and how greater understanding will better the future they will inherit. We need our kids to hear our words – and also see us live our own lives with love.

And we can’t forget our responsibility to remind our kids of the role models whose light shines through in times of darkness. The police and first responders, the lifesaving bystanders and blood donors. Those who comfort mourners and visit the wounded. The victims whose last acts on this earth helped others to safety. They’re not just role models for our kids – their actions are examples for all of us.

To be a parent is to come to realize not everything is in our control. But as parents, we should remember there’s one responsibility that’s always in our power to fulfill: our obligation to give our children unconditional love and support; to show them the difference between right and wrong; to teach them to love, not to hate; and to appreciate our differences not as something to fear, but as a great gift to cherish.

To me, fatherhood means being there. So in the days ahead, let’s be there for each other. Let’s be there for our families, and for those that are hurting. Let’s come together in our communities and as a country. And let’s never forget how much good we can achieve simply by loving one another.

Happy Father’s Day to all the dads out there, and have a great weekend.

Previous Post: « Bill Maher: Trump’s Reaction to Orlando Exposed Him as a Narcissist – WATCH
Next Post: This Gym in Thailand is Staffed Exclusively by Transgender Men »