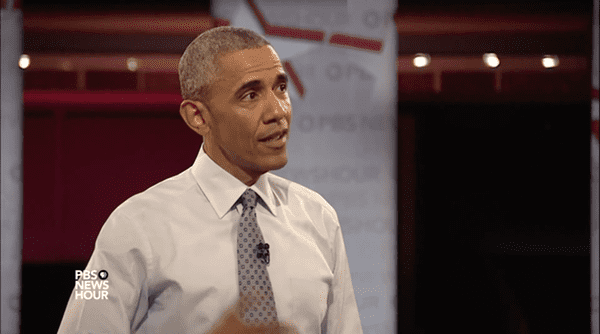 During a PBS town hall, President Obama made a strong show of support for transgender rights and debunked the idea that he is forcing the issue onto the country.

President Obama was asked by a person in the town hall in Elkhart, Indiana, “With all the pressing issues that you have before you right now, why is the issue of which bathroom a person uses such an issue?”

“Somehow people think I made it an issue, I didn’t make it an issue. What happened and what continues to happen is you have transgender kids in schools. And they get bullied. And they get ostracized. And it’s tough for them.”

PREVIOUSLY – Here is the Obama Administration’s Sweeping Transgender Guidance for Schools: READ IT

As The Washington Blade notes, President Obama also said that he decided to weigh in on transgender students’ rights because schools around the country were seeking guidance from the federal government:

“I just wanted to emphasize to you, though, it’s not like I woke up one day and I said you know what we really need to do is let’s start working on high school bathrooms,” Obama said. “I was thinking about ISIL. And I was thinking about, you know, the economy and I’m thinking about jobs. But one of the things that, as president, you learn is that you don’t choose the issues all the time. The issues come to you. And then you have to make your best judgment about what you think is right, and I’ve expressed what I think is the best judgment that is consistent with our traditions and our laws.”

President Obama also said that the “Golden Rule” should play a key role in how we view transgender issues:

“My answer is that we should deal with this issue the same way we’d want it dealt with if it was our child. And that is to try to create an environment of some dignity and kindness for these kids. And that’s sort of the bottom line.”

“I have to say what’s in my heart, but I also have to look at what’s in the law, my best interpretation of what our laws and our obligations are, is that we should try to accommodate these kids so they are not in a vulnerable situation.”

“Now, I understand that people, you know, for religious beliefs or just general discomfort might disagree. And I’m not the one who’s making a big issue of it. But if the school districts around the country ask me, ‘What do you think we should do?,’ then what we’re going to do is tell them let’s find a way to accommodate them in a way that makes sure that these kids are not, you know, excluded and ostracized.”

“I have profound respect for everybody’s religious beliefs on this.”