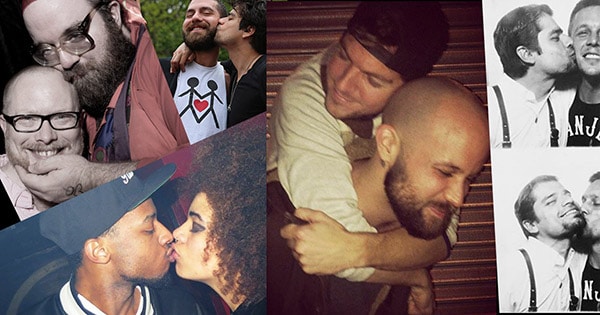 5 Positive Things to Remember After Orlando

Queer culture has always existed as parade and funeral, from the very first time a smiling boy with a limp wrist was beaten for having a good time.

Although the scale of violence in Orlando is unfathomable, how to cope with extremes is built into our community’s DNA. Our culture is still young and has lived in shadow for so long that it still needs victories and tragedy to shed light on where it stands to others and to itself.

As a gay man whose earliest memories were AIDS vigils, who was a closeted teen in high school during Columbine, who wept angry tears at the God Hates Fags brutality of Matthew Shepard’s funeral, who has a chipped tooth from a gay bashing on a San Francisco bus, this violence is not new. For younger brothers and sisters who have not lived through these kinds of tragedies, and for those of older generations who are so familiar that they may feel numb, here are 5 things to remember that gay history has taught us.

Now is a time to observe and listen.

These tragedies pull back society’s mask, make us face the hypocrisies of others, our own prejudices and blind spots. For example, until now, the 1973 Upstairs Lounge Fire in New Orleans was the largest mass killing of gay people in the US, 32 dead by arson by a man suspected to be a gay patron. Reaction spoke volumes about the value of our lives at the time: families refused to claim bodies, the media ignored us, politicians joked and pastors remained silent.

In a social media culture that values talking over listening, it’s crucial to take a break from posting to really observe how Orlando is being dealt with. Who ignores the gayness, the color of the victims, the homosexual history of the murderer? Which politicians will try to mutate gay solidarity into Islamophobia and drag us into another election year? How are your family, co-workers, even your Lyft driver talking about this?

Are they talking about this? The answers may be hard to stomach but they break through the politeness of “tolerance” and educate us in a way that nothing else can.

You are still safe in our spaces.

Our nightlife has survived police prosecution, AIDS, gentrification and it will survive this. We are a people with a rich history of peaceful gathering, who can channel grief and aggression into dancing and sex. It is normal to look over your shoulder a little bit more during this time, but it’s important to remember this level of mayhem is still an aberration, the freak collision of American gun laws and mental illness.

We are no more worthy of martyrdom and paranoia than others who have fallen victim to these mass shootings. Just as a black churches continue their worship and faith after Charleston, and parents still happily send their children to school after Sandy Hook, our own sacred spaces can and will survive. We are also a people who know how to demand equality and civil rights and now that our cause has become directly involved in gun control, American politics will try and mold this narrative to their own interests.

Regardless of how this plays out, our community will need to direct how we hold and respect our own spaces, so that club owners, bouncers and promoters can go back to fighting the real threat to our nightlife: bachelorette parties.

There is one rainbow flag.

For too long, being “PC” has caused a rift between the letters of the LGBTQI community. These happen in cycles, like family fights. Just as gay men and lesbians in the Gay Liberation movement split in the 1970’s over political differences then came together during the AIDS crisis, this will galvanize and remind us once again that trans, gay men, lesbians and intersex are all one family and unfortunately, hated in equal measure.

Yes, there is severe inequality that prevents many of our people, especially trans and minorities, from getting access to the most basic medical and social services, but these are problems that we fight together, not with one another. It’s important we keep our community from becoming a hierarchy of victim-hood, focusing too much energy on who can be the most offended, or who can be the least guilty of “privilege.”

We are a culture that has historically thrived on camp and humor to deal with this kind of hate and now more than ever it’s important we can joke and mourn with one another across the spectrum of identities.

Gay men who lined up to donate blood after the shooting were turned away, unaware that for thirty years there has been a government ban on blood donations from men who have sex with men, an FDA regulation that dates to the early days of AIDS. Although testing advancements rendered the ban obsolete decades ago, it has remained, now in the form of a 12 month celibacy period required only of gay and bisexual men. It’s government-sanctioned HIV stigma, the same stigma that makes us feel “unclean,” that causes HIV rates in minorities to reach apocalyptic levels, that keeps HIV criminalization and trans discrimination laws on the books.

While the rest of straight American chases its tail on how to deal with this, now is an opportunity for us to view the cracks in the foundation of our “freedoms” and demand changes at a government level.

Community is our religion.

This communal PTSD we are all feeling is proof of a beautiful thing: shared experiences bind every LGBTQI person in the world. Gossip, romances and even one night stands of Orlando’s queer community will be touched by this event for generations and you know what? That’s how it should be.

Just as Pride, Marriage Equality, and RuPaul on Mondays join us, these catastrophes join just as powerfully, if not more. Across the globe, the webs of interactions that make up our small gay world are vibrating with love and sadness. If you don’t feel this way, this is a reminder that you should do everything you can to join and build community.

This kind of hatred will not go away, we all know that by now, but the only way to combat it is through worshiping one another in friendship, finding catharsis through queer love in ALL its forms, to show the world that for us solidarity doesn’t just mean slapping a Facebook filter on a photograph.

In 1973, when the memorial service for the Upstairs Lounge was finally held, mourners who were closeted exited through the front steps of the church unafraid of facing the cameras, anonymous donors paid for the funerals of unclaimed bodies and although the fire was largely ignored by history, Southern queers that had no benefits from Stonewall looked after one another. We are a resilient people and our response to catastrophes have always been elegant, tender, and furious. This will be no different.

is a Mexican artist/activist and a featured Towleroad contributor. His work focuses on gay male history, sexuality and nightlife. Current projects include the film documentation of Blood Mirror protesting the FDA’s current ban on gay blood, as well as the recreation of 3 Eras of Gay Sex and 50 Years of Gay Male Culture. For more work, visit LeoHerrera.com and follow on Instagram.