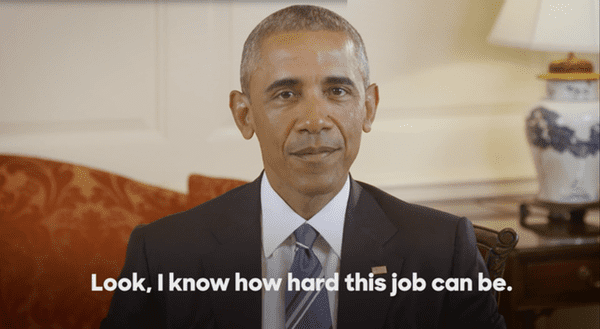 “I know how hard this job can be. That’s why I know Hillary will be so good at it. In fact, I don’t think there’s ever been someone so qualified to hold this office,” he says in the video, which was tweeted by Clinton’s official Twitter account.

Obama and Clinton will appear together in their first joint campaign trip together next Wednesday in Green Bay, Wisconsin, Clinton’s campaign said.

The endorsement came just hours after Obama held a meeting at the White House with Clinton rival Bernie Sanders, who told reporters after the summit that he will remain in the race through the District of Columbia primary next week but indicated that he will meet with Clinton soon “to see how we can work together to defeat Donald Trump and to create a government which represents all of us and not just the one percent.”

Obama thanked Sanders for inspiring young people to get involved in the political process. He also contested the notion that the heated primary will be bad for the Democratic party. “They said that 8 years ago as well,” Obama said.

Obama also called for party unity, saying, “Secretary Clinton and Senator Sanders may have been rivals during the primary but they’re both patriots who love this country and they share a vision for the America we all believe in.”

President Obama endorses Hillary: "I don’t think there’s ever been someone so qualified to hold this office." https://t.co/KetvKoa853

After sharing the news on Twitter, Clinton also clapped back at Donald Trump’s response to the announcement.

Watch the endorsement, below.