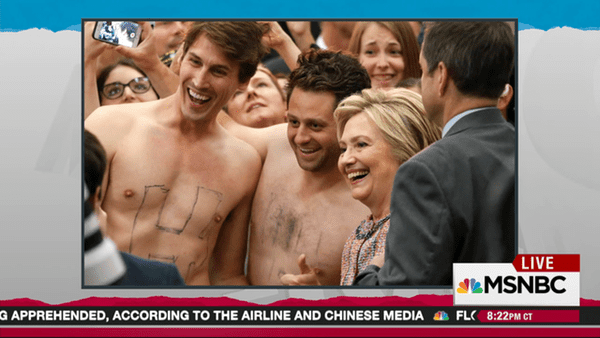 Last night on The Rachel Maddow Show, Maddow took a deep dive into the politically satirical actions of two pranksters who have been trolling presidential candidates this election cycle.

We first told you about these pranksters, who have been identified as Davram Stiefler and John Nelson, last week when they decided to troll Hillary Clinton at a rally in Orange County, California. The guys appeared shirtless and caught Clinton’s attention just in time to keep from being kicked out.

Despite reports indicating that these guys were not actually supporters of Clinton (including our own), Clinton’s campaign included them in a new Instagram video.

The two men were previously seen at a Hillary rally wearing “Settle for Hillary” shirts, and were also heard saying they were excited to ‘settle for Hillary’ after meeting the candidate on the rope line at the Orange County rally.

Watch as Maddow digs into the pranksters’ storied history of targeting just about everyone with the exception of Bernie Sanders, below.