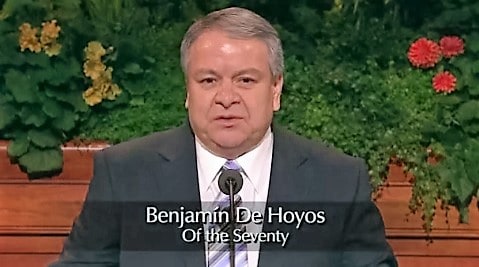 Mormon church leaders have issued a directive that members in Mexico should oppose a new initiative to legalize same-sex marriage.

“The Mexican State should impede discrimination in any form and assure equal rights for everyone,” he said.

However, last week Mormon Mexican area authority Elder Benjamin DeHoyos (above) encouraged “members of the Church to unite our voices with those of other citizens in exercising our rights, as they are listed in the Political Constitution of the United Mexican States, which establish and honor religious liberty, expression of beliefs and thoughts, both in public and private.”

According to KUTV.com, church officials have also requested that bishops read DeHoyos’ remarks to congregations in the form of a statement which reads in part:

“Due to the Federal Government’s recent announcement of the initiative to legalize marriage between people of the same sex in the entire country, we emphasize the Church’s position on this topic as it is described in ‘The Family: A Proclamation to the Word.’ We reaffirm that ‘The family is ordained of God’, and ‘marriage between a man and a woman is essential for [God’s] eternal plan’.”

Same-sex marriage is already legal in some Mexican states and in Mexico City. Currently, gay couples who live in states that do not recognize same-sex marriage must sue to obtain a marriage license. Peña Nieto’s proposal will require a two-thirds majority vote from the Mexican congress.

Watch Peña Nieto propose the legalization of same-sex marriage below.