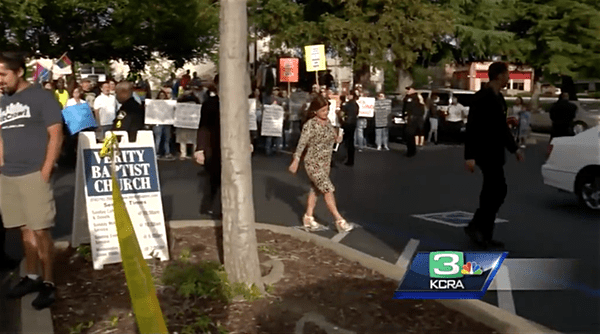 Earlier this week, approximately 100 protestors gathered outside the church of the Sacramento pastor who praised the massacre at Orlando gay nightclub Pulse.

Pastor Roger Jimenez gained nationwide notoriety after uploading a sermon of his to YouTube on the Orlando massacre in which he equated gay people to pedophiles and said he wished more people had been slain.

“People say, like: ‘Well, aren’t you sad that 50 sodomites died?’ ” Jimenez said, referencing the initial death toll in Orlando, which authorities later clarified included 49 victims plus the gunman. “Here’s the problem with that. It’s like the equivalent of asking me — what if you asked me: ’Hey, are you sad that 50 pedophiles were killed today?’

“Um, no, I think that’s great. I think that helps society. You know, I think Orlando, Fla., is a little safer tonight.” 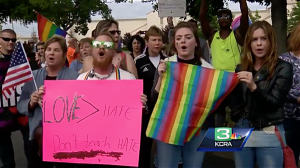 On Wednesday night, the parking lot of Jimenez’s Verity Baptist Church was filled with protestors who shouted “We are one pulse” and carried pride flags and pro-LGBT posters. The protesters showed up as parishioners were arriving for a Bible study group.

It was supposed to be a silent protest, but dozens of people shouted and sang as parishioners, with Bibles in hand, tried to make their way through the crowd.

Yellow tape and Sacramento County sheriff’s deputies kept protesters back and didn’t allow them inside. […]

Jimenez briefly came outside but turned back around as protesters continued to shout.

“It’s one thing to personally say they don’t believe in homosexuals, but when they advocate the killing of people, it’s just wrong — it’s a crime,” protester Jesse McGuinn said.

It brought Carol Nolan to tears.

“Because it promotes hate,” Nolan said. “And if we don’t stop hating each other, we’re not gonna have a planet left.”

Watch news reports from KCRA 3 and CBS along with video of Jimenez’s hateful sermon, below.