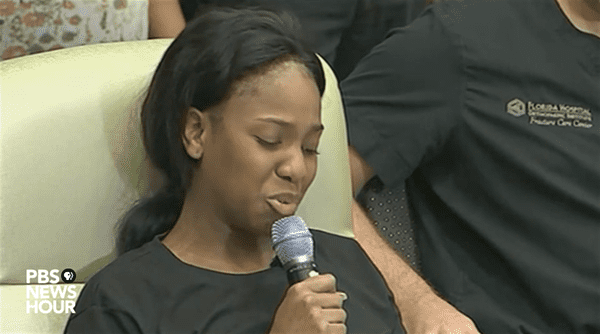 One of the survivors of Sunday’s mass shooting at gay nightclub Pulse in Orlando, Florida, shared a poem on Tuesday which she says sums up how she feels having lived through the worst terrorist attack in the U.S. since 9/11.

Only 20 years old, Patience Carter appeared before reporters at a hospital in Florida to describe in vivid detail how she survived the attack at Pulse and witnessed unthinkable carnage. But before she recounted her tale, Carter said, “I want to share a poem that I wrote in the middle of the night last night that really shows everything that I’m feeling right now and it’s a part of my healing process.”

The poem might be called, “The Guilt of Being Alive Is Heavy.”

Carter read, “As the world mourns the victims killed and viciously slain, / I feel guilty about screaming about my legs and pain because I can feel nothing, / Like the other 49 who weren’t so lucky to feel this pain of mine.”

Watch Carter read her heartbreaking poem in full, below.

Text of Carter’s poem, via FOX29, is also provided below:

“The guilt of feeling grateful to be alive is heavy. Wanting to smile about surviving but not sure if the people around you are ready, as the world mourns the victims killed and viciously slain,

I feel guilty about screaming about my legs and pain…

Because I could feel nothing

Like the other 49, who weren’t so lucky to feel this pain of mine. I never thought in a million years that this could happen.

I never thought in a million years that my eyes could witness something so tragic.

Looking at the souls leaving the bodies of individuals.

Looking at the killer’s machine gun throughout my right peripheral.

Looking at the blood and debris covered on everyone’s faces.

Looking at the gunman’s feet under the stall as he paces.

The guilt of feeling lucky to be alive is heavy, it’s like the weight of the oceans walls crushing uncontrolled by levies. It’s like being drug through the grass with a shattered leg and thrown in the back of a Chevy.

Being rushed to the hospital and told you’re going to make it, when you laid beside individuals whose lives were brutally taken.

The guilt of being alive is heavy.”