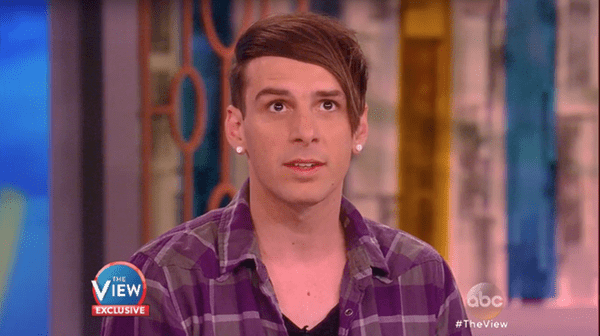 Christian rock star Trey Pearson appeared on The View on Thursday to talk about his decision to come out as gay.

As we reported earlier this week, Pearson recently opened up about his sexuality after years of struggling to reconcile his Christian faith with his identity. Pearson told The View cohosts,

“I grew up in a Christian home and church where I was taught that God hated homosexuality and I could choose to be straight. And I tried for a really long time. And I don’t think I was ever trying to lie to anyone. I was trying to convince myself that I could be something I wasn’t.”

Of Christian teachings that condemn homosexuality, Pearson added, “A lot of the church continues to teach that this is a choice and they don’t realize how damaging it can be…There’s still people that are teaching these hurtful things.”

Pearson, who was married to a woman for 7 1/2 years and has two children, says that he entered into his marriage because he believed that’s how he “was supposed to be.”

Of his ex-wife and his Christian family, Pearson said, “They’ve been unbelievable loving and supporting” since coming out. Talking about his ex-wife, Pearson said, “By the time I was able to tell myself and tell her, she just hugged me and cried and told me how proud of me she was for being able to be honest with myself. She’s been my biggest supporter, my biggest advocate.”

Pearson also shared his father’s emotional response to his coming out:

“The day that my story came out, my dad was at work and he read it. And he showed up on my porch while I was curled up on the couch, not sure what people would think, who would be talking about it. And he just knocked on the door–I had no idea he was coming–and he just hugged me for ten minutes and told me how much he loved me.”

Pearson still considers himself a Christian and says he’s “more in love with Jesus than ever.” He hopes that his story will help change hearts and minds in the Christian community:

As for his love life, Pearson said he’s holding off on jumping into the dating pool for the time being:

“I’m not dating. I decided to take at least a year to get to know myself as a gay person before starting to get to know who somebody else is in that sort of way.”