The Republican Party has done it again, taking a big step toward approval of its most staunchly anti-LGBT, hateful platform of all time.

The platform includes provisions supporting state laws to restrict transgender rights on bathroom use, support of conversion therapy for gay people “by saying that parents should be free to make medical decisions about their children without interference,” according to the New York Times. It also says “that ‘natural marriage’ between a man and a woman is most likely to result in offspring who do not become drug-addicted or otherwise damaged.”

The paper adds, “nearly every provision that expressed disapproval of homosexuality, same-sex marriage or transgender rights passed. The platform calls for overturning the Supreme Court marriage decision with a constitutional amendment and makes references to appointing judges ‘who respect traditional family values.’”

When gay Republican delegate Rachel Hoff attempted to add language that specifically noted LGBT people as targets of the Islamic state it was shot down by conservative delegates “who said they felt there was no need to single out any one group.”

The battle for the platform was combative, particularly on these issues, but social conservatives won the day over pro-LGBT delegates with Paul Singer’s American Unity Fund.

Through hours of debate on topics ranging from federal lands to immigration to the economy to family values, a handful of delegates gathered for Platform Committee meetings ahead of next week’s Republican National Convention repeatedly challenged their peers to moderate provisions affecting gay and lesbian Americans. They were for the most part rebuffed by the 112-member panel, which approved a GOP platform that opposes same-sex marriage rights, supports efforts to restrict bathrooms to individuals’ birth gender and protects businesses who refuse services to individuals based on religious objections to gay marriage.

After failing repeatedly in their efforts, the group was buoyed by the number of delegates who voted in their favor, including about 20 delegates raising their hands in support of a proposal from D.C. delegate Rachel Hoff to revamp the party’s position on marriage to broaden the language to include “diverse” views on marriage and support the “strength of all families” While raising the amendment, Hoff also emotionally made public to her peers that she was gay. New York delegate Annie Dickerson said the GOP Platform Committee has been resisting an obvious trend in the country toward gay rights, calling same-sex marriage “settled law,” saying it is only a matter of time before federal nondiscrimination statutes protecting LGBT rights are enacted.

Other things in the platform: approval for a border wall along Mexico, support for teaching the Bible as a historical document in public schools, an order that lawmakers use religion as a guide when legislating, criticism of President Obama as weak, barring women from combat in the military, and a denunciation of pornography as a “public menace” which is harmful to children.

But the moderates will be heard at the convention, guaranteeing that these social issues will come up front and center: “The party’s approach to social issues now threatens to disrupt the convention next week. Moderate delegates pushing for gay rights language in the platform secured enough signatures on Tuesday to demand a vote on their proposals from all 2,475 delegates.” 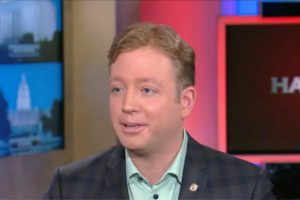 The Log Cabin Republicans sent out this fundraising email shortly after the Party of Hate’s platform was approved:

There’s no way to sugar-coat this: I’m mad as hell — and I know you are, too.

Moments ago, the Republican Party passed the most anti-LGBT Platform in the Party’s 162-year history. Opposition to marriage equality, nonsense about bathrooms, an endorsement of the debunked psychological practice of “pray the gay away” — it’s all in there.

This isn’t my GOP, and I know it’s not yours either. Heck, it’s not even Donald Trump’s! When given a chance to follow the lead of our presumptive presidential nominee and reach out to the LGBT community in the wake of the awful terrorist massacre in Orlando on the gay nightclub Pulse, the Platform Committee said NO.

BUT…now is not the time to sit around feeling sorry for ourselves. Log Cabin Republicans has been officially credentialed for the Republican National Convention, and when it convenes in Cleveland in a mere 6 days’ time I want to be able to take a stand, but we’re going to need your support to do it.

Cleveland is rightly making the most of their time in the spotlight, and prices for advertising in area news outlets are sky-high. That’s why I’m writing to ask for your help.